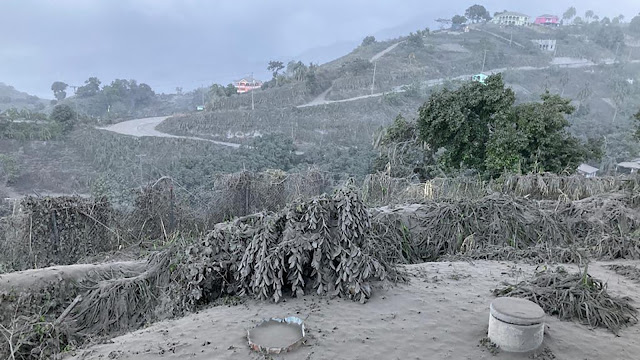 Ash coats a hillside on St. Vincent on April 11, 2021. (Photo by UWI-Seismic Research Centre, Prof. Robertson)
St. Vincent and the Grenadines (UCTP Taino News) - La Soufrière, a volcano on the Caribbean Island of St. Vincent began a series of intense eruptions last Friday. For close to a week, subsequent eruptions have covered the island in volcanic ash. Super-heated gas and lava flows have gushed down the mountainside. Thousands of residents in the affected “Red Zone” area are now displaced or have been evacuated. A humanitarian crisis is now emerging as islanders are left without clean water and electricity. Several news sources are reporting that government officials fear the situation will also exacerbate the COVID-19 pandemic.
“These are the times we need to be ready to support our relatives” stated Irvince Auguiste, a co-President of the Caribbean Amerindian Development Organization (CADO). Auguiste is a member of the Kalinago (Carib) Nation of Dominica and a former Chief of the territory. He continued by stating “CADO and the United Confederation of Taíno People (UCTP) will be collaborating on a relief effort for the Indigenous Kalinago community and others in St. Vincent.”
The dome of the volcano was completely destroyed during the periodic eruptions. Reports estimate that more than 460 million cubic tons of earth and rock have jettisoned into the atmosphere from the eruptions. The wind is carrying the volcanic ash to St. Vincent’s island neighbors such as Barbados, Grenada, and Saint Lucia. Eruptions and seismic activity are expected to continue over the next few days.
UCTPTN 04/15/2021
Posted by UCTP Office at 11:00 PM