Taino Recognize Their Own In NYC 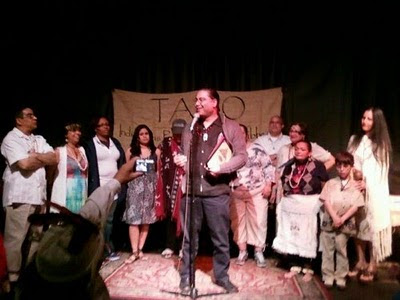 Roberto Borrero and members of Iukaieke Guainia at the Taino Awards
New York, New York (UCTP Taino News) - A diverse group of Taino community members gathered on Saturday, 24 April to support the second annual “Taino awards.” The event was held at the Nuyorican Poets Café and it was presented by the KuKarey Spiritual Circle and Yamocuno Tanama Yucayeke Taino organizations.

Hosted by Caridad "Kachianao" de la Luz, the awards celebrated individuals “who unselfishly give of themselves everyday to the Taino community.” The awards recognized educators, artists, humanitarians, youth, elders and other community members.

Bill would Set up Vote on Potential 51st State

WASHINGTON D.C. - This week (26-30 April) , the U.S. House of Representatives is expected to vote on H.R. 2499, the Puerto Rico Democracy Act. This bill would authorize a federally sanctioned plebiscite (vote) of the Puerto Rican people regarding their political future.

“There are some important factors that should be made clear and be carefully considered before Congress votes on this bill. While it is said that the outcome of the plebiscites are non-binding, the results could set the stage for future action as soon as next year – including a Congressional vote on statehood for Puerto Rico,” said House Natural Resources Committee Ranking Member Doc Hastings.

“Action towards potentially creating a 51st state is not a decision that Congress should make casually and has very serious implications for both the 50 existing states and the people of Puerto Rico. Congress needs to have an honest and forthright discussion of these issues. For example, under this bill, a majority vote is not required for statehood or independence to be declared the winner. There is also the question of a common language and Puerto Rico’s recognition of Spanish as an official language. In addition, if Puerto Rico were ever to became a state it could get six new members of the House of Representatives and cost billions of dollars per year in federal spending.

The people of Puerto Rico would also have to pay federal income tax on income earned on the island, which they currently don’t pay. As we approach this vote, I will be encouraging Members of Congress and the people of 50 states and Puerto Rico to educate themselves on the details of this bill and its potential implications.”

Source: US House of Representatives
Natural Resources Committee Republican Press Office
Posted by UCTP TAINO NEWS at 10:59 AM No comments: 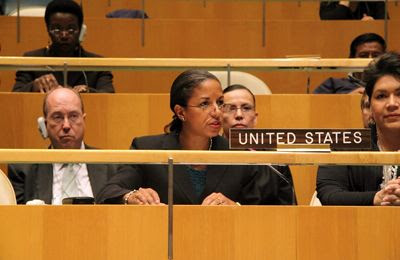 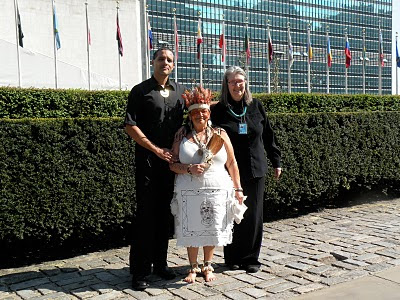 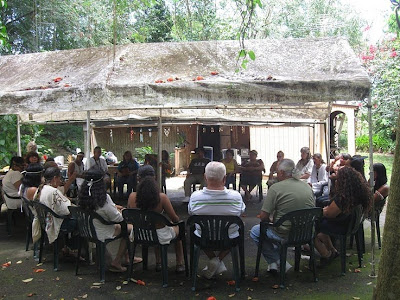 The Consejo General de Tainos Borincanos host a meet for community leaders and youth in Trujillo Alto, Boriken to discuss plans for the Boriken 2010 Peace and Dignity Run.
(Photo: Courtesy of Bohio Attabei)
Boriken (UCTP Taino News) - For many ancient Indigenous cultures runners were an important way to send messages between communities. Taino People soon plan to highlight this tradition by organizing a “four directions” run this July on the island of Boriken (Puerto Rico). The Boriken 2010 Peace and Dignity Run is linked to the “Peace and Dignity Journeys”, spiritual runs that embody the indigenous prophecy of the Eagle and the Condor. This prophecy mandates the reunification of Indigenous Peoples throughout the Americas.

Vanessa Inarunikia Pastrana, one of the organizers of the Boriken Run sees the inclusion of Caribbean Indigenous Peoples as an essential but often overlooked element of the Eagle and Condor prophecy.

“Our people need to be a part of this healing process” states Pastrana. “The Caribbean is a part of the sacred hoop of Indigenous Nations.”

Since 1992, Peace and Dignity Journeys are undertaken every four years with runners starting out from Alaska and South America. Carrying sacred staffs, the participants run over six months stopping to visit various Native communities along the way. The runners finally meet in ceremony somewhere in the “center” of the continent. In 2008 the runners met in Panama City.

“The next Peace and Dignity Journey will take place in 2012 and the run in Boriken will connect Taino and other relatives to this important moment in our collective history” continued Pastrana. “This is not about politics but it is rather a spiritual way to raise awareness about our ancestral traditions and to remind ourselves of who we are as Indigenous People.”

Updates and information on the Boriken 2010 run can now be found at the website, http://boriken2010peaceanddignityjourney.blogspot.com/. Volunteers and donations are being requested. 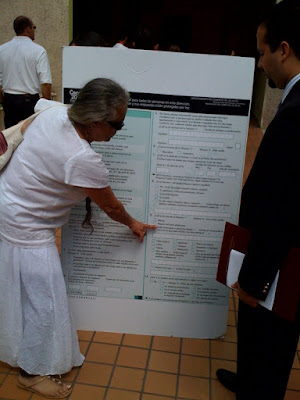