SIOUX FALLS, S.D. — Russell Means, a former American Indian Movement activist who helped lead the 1973 uprising at Wounded Knee, reveled in stirring up attention and appeared in several Hollywood films, has died. He was 72.

Means, a Wanblee native who grew up in the San Francisco area, announced in August 2011 that he had developed inoperable throat cancer. He told The Associated Press he was forgoing mainstream medical treatments in favor of traditional American Indian remedies and alternative treatments away from his home on the Pine Ridge Indian Reservation.

Means was an early leader of AIM and led its armed occupation of the South Dakota town of Wounded Knee, a 71-day siege that included several gunbattles with federal officers. He was often embroiled in controversy, partly because of AIM’s alleged involvement in the 1975 slaying of Annie Mae Aquash. But Means was also known for his role in the movie “The Last of the Mohicans” and had run unsuccessfully for the Libertarian nomination for president in 1988.

AIM was founded in the late 1960s to protest the U.S. government’s treatment of Native Americans and demand the government honor its treaties with Indian tribes. Means told the AP in 2011 that before AIM, there had been no advocate on a national or international scale for American Indians, and that Native Americans were ashamed of their heritage.

“No one except Hollywood stars and very rich Texans wore Indian jewelry,” Means said. “And there was a plethora of dozens if not hundreds of athletic teams that in essence were insulting us, from grade schools to college. That’s all changed.”

The movement eventually faded away, the result of Native Americans becoming self-aware and self-determined, Means said.

Paul DeMain, publisher of Indian Country Today, said there were plenty of Indian activists before AIM but that the group became the “radical media gorilla.”

“If someone needed help, you called on the American Indian Movement and they showed up and caused all kind of ruckus and looked beautiful on a 20-minute clip on TV that night,” DeMain said. 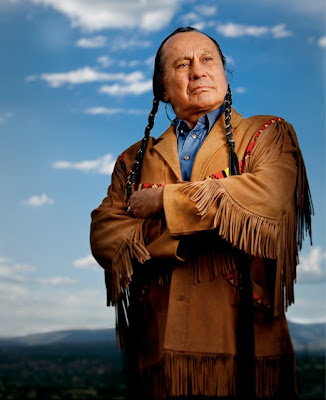 Means said he felt his most important accomplishment was the founding of the Republic of Lakotah and the “re-establishment of our freedom to be responsible” as a sovereign nation inside the borders of the United States. His efforts to have his proposed country recognized by the international community continued at the United Nations, he said, even as it was ignored by tribal governments closer to home, including his own Oglala Sioux Tribe.

But others may remember him for his former organization’s connection to Aquash’s slaying. Her death remains synonymous with AIM and its often-violent clashes with federal agents in the 1970s.

Authorities believe three AIM members shot and killed Aquash on the Pine Ridge reservation on the orders of someone in AIM’s leadership because they suspected she was an FBI informant. Two activists — Arlo Looking Cloud and John Graham — were both eventually convicted of murder. The third has never been charged.

Means blamed Vernon Bellecourt, another AIM leader, for ordering Aquash’s killing. Bellecourt denied the allegations in a 2004 interview, four years before he died.

DeMain, an Indian journalist who researched the case, said AIM’s leaders know who ordered Aquash’s killing but have covered up the truth for decades. Also in 1975, murder charges were filed against Means and Dick Marshall, an AIM member, in the shooting death of Martin Montileaux of Kyle at the Longbranch Saloon in Scenic. Marshall served 24 years in prison. Means was acquitted.

In addition to his presidential bid, Means also briefly served as a vice presidential candidate in 1984, joining the Larry Flint ticket during the Hustler magazine publisher’s unsuccessful bid for the Republican nomination.

But Means always considered himself a Libertarian and couldn’t believe that anyone would want to call themselves either a Republican or a Democrat. 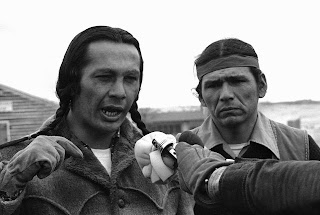 “It’s just unconscionable that America has become so stupid,” he said.

His acting career began in 1992 when he portrayed Chingachgook alongside Daniel Day-Lewis’ Hawkeye in “The Last of the Mohicans.” He also appeared in the 1994 film “Natural Born Killers,” voiced Chief Powhatan in the 1995 animated film “Pocahontas” and guest starred in 2004 on the HBO series “Curb Your Enthusiasm.”

Means recounted his life in the book “Where White Mean Fear to Tread.” He said he pulled no punches in his autobiography, admitting to his frailties and evils but also acknowledging his successes.

“I tell the truth, and I expose myself as a weak, misguided, misdirected, dysfunctional human being I used to be,” he said.

October 22, 2012 Hello our relatives. Our dad and husband, now walks among our ancestors. He began his journey to the spirit world at 4:44 am, with the Morning Star, at his home and ranch in Porcupine. There will be four opportunities for the people to honor his life to be announced at a later date. Thank you for your prayers and continued support. We love you. As our dad and husband would always say, “May the Great Mystery continue to guide and protect the paths of you and your loved ones.” The wife and children of Russell Means 444 Crazy Horse Drive Pahin Sinte, Republic of Lakotah
Source

Posted by UCTP TAINO NEWS at 11:23 AM No comments:

Open Letter to the Taino Community

To Roberto Borrero, Members of the UCTP and the Greater Taino Community,

On behalf of Raindrop Games, I am writing this letter to answer some of the more common questions about the Taino-themed video games we are building.

"Why do you want to make games about the Taino people?"

Our goal is to use video games to help create a better world. We believe one of the best solutions to the world's problems is to inspire people to be better. We specifically chose the Taino as an historical exemplification of this spirit, having persevered and survived a cultural clash that brought them close to
extinction. We hope that by educating people about who the Taino are will help provide a more accurate glimpse into their history. We believe when people understand a culture that is foreign to them, it expands their empathy and provides a deeper insight into humanity's broader issues.

"Why make a video game? Why not a movie or book? Wouldn't a video game trivialize the subject matter?"

Games have one strength that no other entertainment medium has, they are interactive. Interactivity allows the player to become more involved in the  story as an active participant. What happens to the main character in a story happens directly to the player. In the long run, our plan is to use this unique property of games to create deeper emotional experiences for players. Video games are an upcoming medium with vast potential and we are doing our part to create games used for good.

"Arrival: Village Kasike" gives the player some exposure to the Taino culture before the arrival of Europeans. The player is put in charge of building a village while dealing with threats such as hurricanes, etc. Players will engage in traditional farming and fishing techniques as they provide for their village while informative texts share aspects of historical Taino life. Through the narrative of Naniki, the player can experience the connection between a Village Kasike and her people.

For over four years we have had the great pleasure of working with Roberto Borrero, President of the UCTP, to create video games about the Taino. Roberto's knowledge and insights have made it possible for us to complete our first Taino-themed game. The whole team is grateful for his help and willingness to
see the large potential good of this project.

If any members of the community have any questions or concerns about what we are doing, please feel free to reach out to me via our web site (http://www.arrivalgame.com/content/contact.htm).

Posted by UCTP TAINO NEWS at 2:06 PM No comments:

Pennsylvania (UCTP Taino News) - The House of Representatives of the Commonwealth of Pennsylvania, on October 3rd, recognized “Pennsylvania’s American Indian peoples and communities”, as well as the first Saturday in the month of October as Indigenous Peoples Day. The recognition was issued in “noncontroversial” House Resolution No. 861, introduced to the Assembly by Hon. Representatives V. Brown, Bishop, Brennen, Caltagirone, Digirolamo, Kirkland, Parker, Cultler, M.O’Briean, Staback, and Frankel.

The resolution acknowledges the “many great nations that inhabited the territory”, such as the Lenape, as well as the many “American Indian Peoples living in urban cities like Philadelphia”.  At the presentation of Resolution 861 in Harrisburg, several local Indigenous representatives were invited to address the Assembly including Carlos Rivera, leader of Yucayeque Taino Ma’Oconuco.

At the event, El Ali also acknowledged the United Confederation of Taíno People and its President, R. Múkaro Borrero, for being the “inspiration” to lobby for an “Indigenous Peoples Day in Pennsylvania”. Borrero was on hand to receive a copy of the Resolution on behalf of the Confederation.

Treasures of the Ancestral Spirits 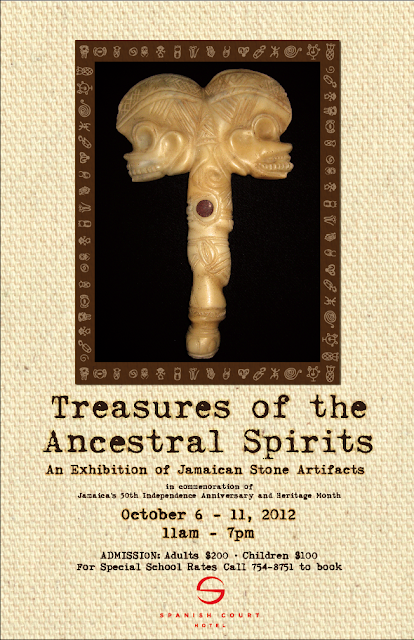 This event takes place in Jamaica, West Indies
Posted by UCTP TAINO NEWS at 2:19 AM No comments: