Treaty Council Expands Board of Directors

The nominations of Saul Vicente Vasquez (Zapoteca) of Oaxaca, Mexico and Naniki Reyes Ocasio (Taino) of Boriken (Puerto Rico) were unanimously accepted by all standing board members. Roberto Borrero (Taino) was also nominated for and accepted as an alternate Board member. Both Reyes Ocasio and Borrero are representatives of the United Confederation of Taino People.

The IITC Board meeting followed a special Human Rights Workshop and the annual International Treaty Council Conference with indigenous representatives arriving in Kuna Nation territory from throughout the Americas.

No cocktail for Columbus at Cuba landing monument

A visitor had asked whether the bar at windy Bariay Bay, the first place in Cuba where Christopher Columbus set foot on his 1492 voyage, had concocted a special drink in honor of the world-famous navigator and explorer.

But like much else in communist-led Cuba, history gets a different twist at the Bar Corocote, part of an oddball monument to Columbus at the site.

"We do have the Corocote (cocktail)," says bartender Alexandr Gomez Gonzalez, pushing back the cocked hat he wears as part of his Christopher Columbus costume.

Made from honey, coconut juice and rum, the Corocote is named after the god of virility worshiped by the indigenous Taino people who lived here when Columbus made landfall on October 28, 1492.

The drink is said to boost a man's virility, Gomez said, slyly glancing toward a stone likeness of Corocote perched by the front door.

The crouching little figure, with the barest hint of a smile and a significant male appendage, looked like he had drunk several of his namesake cocktails.

Located on Cuba's northeastern coast, in Holguin province about 500 miles east of Havana, Bariay National Monument Park is far enough off the beaten path so that, especially in Cuba's summer low season, days can go by without visitors.

Park employees pass the time watching DVDs of Miami television programs while they wait for tourists.

When visitors pull up, the employees greet them with a full-costume re-enactment of Columbus' arrival.

His landing is commemorated by a lone plaque, almost lost amid sculptures of Taino gods, a replica of a Taino village -- which includes the bar -- and the ruins of a marker, toppled last year by Hurricane Ike, for a small Taino archeological site.

The shore, now a badly eroded beach, where Columbus and his crew landed their boat is unmarked and obscured by vegetation.

A few minutes drive from the landing site, the Cuban government has constructed a monument in which Spanish-style columns are arrayed in the shape of an arrow. The arrow's tip plunges into the heart of a formation of Taino gods.

Columbus might be surprised by the apparently sinister message projected by this monument, at least as it applies to his Bariay stop, because he landed there hoping to make contact with natives but saw none.

The Italian-born explorer, sailing under the Spanish crown and in search of a sea route to India, had first encountered the New World two weeks before in the Bahamas, where the islanders told him of a great landmass to the southwest.

He mistakenly thought it must be the Asian continent and set sail in that direction.

His small fleet - the Nina, Pinta and Santa Maria -- entered what is now Cuba's Bariay Bay because its wide mouth offered safe passage. Then the explorers went ashore at a small village where they assumed they would find inhabitants.

But by the time they landed, the frightened Taino villagers had run away into the surrounding wilderness.

After a quick look inside the natives' conical, wood-and- palm-frond structures, the explorers returned to their ship and sailed away the next day, landing again a few miles west at what is now Gibara.

There, he had better luck meeting natives, stayed a few days, and for many years it was thought that Gibara was where he first touched Cuban soil.

Although his visit to Bariay was brief, its lush flora and fauna and nearby mountains so impressed him that he wrote in his log it was "the most beautiful place human eyes have seen."

He gave enough of a description, including of a distinctive mosque-shaped mountain, that nearly five centuries later, historians decided Bariay, not Gibara, was the place he wrote about.

Cuba's ambivalent monument to Columbus reflects the long debate about whether his epic voyage of discovery was good or bad for the New World.

But its importance is not in question, said historian Keith Pickering, who runs www.columbusnavigation.com, a website for Columbus buffs.

"This is perhaps the most significant event in human history. It is almost as though everything from the previous five centuries leads up to it, and everything in the following five centuries flows from it," he said.

The opinion from Bar Corocote is less admiring for Columbus.

Sitting under its palm roof, taking refuge from the tropical sun while waiting for tourists, park guide Misleidis Mendez Marrero says Columbus was a historical catastrophe for Cuba's original inhabitants.

"It depends on your point of view, but I feel like it wasn't good because the natives here were practically the kings, the owners of this place -- and with the arrival of Columbus, their lives began to totally change," she said.

Posted by UCTP TAINO NEWS at 3:22 PM No comments:

Taíno Celebrate Diversity in the Bronx 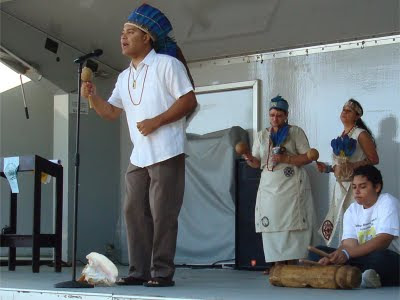 Taino Honor the Moon in Ohio 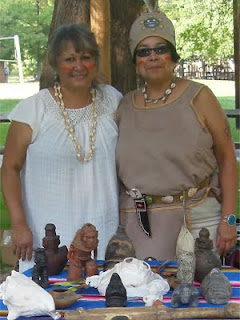 Leni MaisGuariche Sague and Dr. Rose Xochitl Anao Quiñones
honor the full moon and Taino culture in Ohio.
(Photo courtesy of M. Sague)
Youngstown, Ohio (UCTP Taino News) - On Saturday September 5, members of the Caney Indigenous Spiritual Circle joined representatives of the United Confederation of Taino People (UCTP) in the city of Youngstown, Ohio to honor the full moon with ceremony and educational events.
The special gathering was held at Boardman Park and officially hosted by the Ohio Liaison Office of the UCTP, and its representative Dr. Rose Xochitl Anao Quiñones. The ceremony was facilitated by Miguel Sobaoko Koromo Sague. Both the Confederation and the Caney Spiritual Circle maintained information tables at the event allowing participants an opportunity to learn more about ancient and contemporary Taino culture.

During the ceremonial portion of the gathering, Dr. Quiñones and Leni MaisGuariche Sague highlighted the importance of the 28 day moon cycle in Taino culture. Other Taino community members who traveled from New York and Philadelphia also shared teachings and participated throughout the day. Those gathered were greeted by the full moon and a perfectly clear sky as the ceremony concluded. 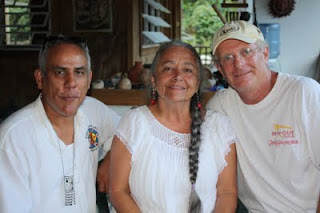 Zacarias noted that the recent trip to Boriken resulted in the gathering of enough film footage and information to pursue the funding needed to continue production.
UCTPTN 09.05.2009
Posted by UCTP TAINO NEWS at 7:38 PM No comments: