A Full Moon By Any Other Name 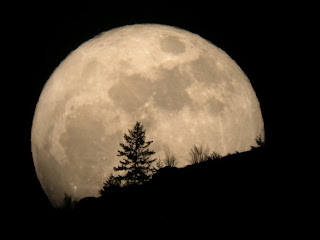 UCTP Taino News - Tonight’s full moon will rise in the southeastern sky in the constellation Capricornus and be visible all night long.

Known by many names, some recognize July’s full moon as the ‘Full Hay Moon’ because it's around this time that farmers harvest, bale and stow hay for the winter.

Northeastern Algonquian peoples call this moon the ‘Full Buck Moon’ as it corresponds to the time when male deer grow new antlers. This moon is also called the 'Thunder Moon' as thunderstorms are common during this time.

For some Taino people, tonight’s full moon offers an opportunity to connect spiritually with the universe and the ancestors. Many Taino women view the full moon as a special time for ceremony individually or collectively.

On the occasion of this full moon one Taino Bibi (Mother/Grandmother), Mildred Karaira Gandia Reyes shared these thoughts “May grandmother Maroia (Moon) always shine upon our spirit, fill our hearts with happiness, love, and guidance in respect and honor of the true Taino way.”

SAN JUAN, Puerto Rico -- Ricardo Alegria, a Puerto Rican scholar known for his pioneering studies of the island's native Taino culture and who is credited with preserving the capital's colonial district, died Thursday. He was 90.

Alegria died at the Cardiovascular Center of Puerto Rico and the Caribbean from complications of heart disease, said his son, Ricardo Alegria Pons. The elder Alegria had been treated for two weeks at the hospital in June and then was hospitalized again Sunday.

"Thanks to his long life of 90 years, he has had a major impact on all aspects of the culture of all Puerto Ricans," his son told reporters. "That work and dedication and love of his country does not disappear with his death."

Gov. Luis Fortuno declared five days of mourning in the U.S. territory, ordering American and Puerto Rican flags to be lowered to half-staff in honor of one of the island's leading cultural figures.

Alegria in 1955 helped found and later served as executive director of the Institute of Puerto Rican Culture, where he was long a passionate advocate of preserving the island's artistic and archaeological heritage. He went on to launch the Graduate Center for Advanced Studies on Puerto Rico and the Caribbean in 1976 and received the United Nations Educational, Scientific and Cultural Organization's Picasso Medal in 1993.

Source: Associated Press
Posted by UCTP TAINO NEWS at 8:26 AM No comments: