These representatives presented statements to the plenary sessions, as well as participated in the several lobbying Caucuses throughout the session.

UCTP representatives have participated at the Forum since its inception and this involvement has led to an increased visibility and awareness of Caribbean Indigenous Issues on an international level.

Posted by UCTP TAINO NEWS at 2:01 PM No comments:

The programming airs every Monday night at 10:30pm (EST) via the World Wide Web. Just tune into Channel 34 at http://www.mnn.org/ website to download and view the weekly thirty-minute installments. If you cannot get the show online, VCR, DVD or VCD copies can be ordered (VCDs can be viewed directly on your computer).

For more information on the shows, please contact : rjhnyc@yahoo.com
Posted by UCTP TAINO NEWS at 1:01 PM No comments:

This is a West Indian marinade used for generations. It's best suited for fish and game. I like it on chicken and pork. Allow meat to marinate for at least an hour before cooking. Make sure you adjust the amount of Chile peppers to your taste.

Also, I sometimes replace the orange juice with marmalade for a sweeter marinade.

This recipe has been scaled to make two servings

Mix well, cover and allow to sit for one hour. Mix well again before adding to fish or meat.

Discard any remaining sauce.
Posted by UCTP TAINO NEWS at 12:56 PM No comments:

Keeping them in our Prayers…

Our condolences all go out to the families in Borikén (Puerto Rico) who have also experienced a similar tragedy as flooding on May 24 in killed at least four people on the island.
Posted by UCTP TAINO NEWS at 1:09 PM No comments: 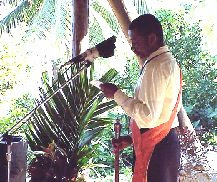 DOMINICA, WEST INDIES - The poor situation of Dominica's indigenous Carib population is being exploited by foreigners, according to the Christian Children's Fund (CCF). The CCF exposed an illegal adoption and baby trafficking racket earlier this week.
It is now calling for action over its claims that families in Guadeloupe and Martinique have been illegally adopting children of Dominica's indigenous Carib people.
The group says there have been 30 such cases over the past 15 years.
Education needed CCF Director, Francis Joseph, told BBC Caribbean Service that the group was trying to educate individuals about the implications of giving up their children for adoption.
"(Parents) need to know that it is irreversible and once they go through proceedings for legal adoption they are unlikely to see their child again," Mr Joseph said.
"What we are asking for under the circumstances and in the situation where mothers are now asking for their kids to be returned, is that in the initial stages that there should be counselling to ensure that in adoption proceedings, the protocol is followed in the best way possible," he said.
The CCF is also warning that problems are arising when adoptees are returning to Dominica in later life. "We have had cases... people who have been taken away and are just returning to the Carib territory unceremoniously, unprepared, speaking French and now trying to fit into the education system but can't speak English," Mr Joseph said.
Ongoing situation Earlier this week, the CCF director said that his organisation had been monitoring the situation for some time but recently there had been an increase in the level of trafficking.
The situation was confirmed by Carib chief Garnet Joseph, who said those involved in the racket took advantage of the poor circumstances of the young Carib mothers and coerced them to give up their babies.
Neither party has been able to confirm whether or how much money is being exchanged. However, both the Carib chief and the CCF director have suggested that the deals have been facilitated by the involvement of local community leaders.
In response to the findings, the government has been urged to restructure the welfare services to closely monitor adoptions. Police have also been asked to pay more attention to children leaving the island.