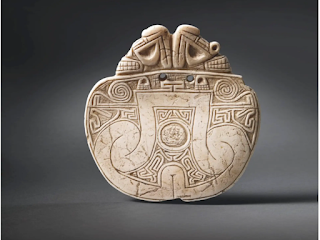 UCTP Taíno News - Taíno community members have expressed outrage upon learning that the renowned Christies' Auction House will be auctioning off "Taíno Masterworks" in collaboration with France's Musee de l’Homme on November 10, 2021. An online petition calling for a halt to the auction and a return of the sacred items has garnered substantial visibility of the issue with thousands of signatories and mainstream press coverage. Individual community members have taken to the internet to support the call to stop the sale and for the repatriation of the cultural items.

"The UCTP condemns these auction plans and demands a halt to the scheduled proceedings. The UCTP further calls upon the seller to immediately enter into a dialogue with Taíno leadership and the Government of the Dominican Republic to plan an appropriate repatriation process."

The UCTP communication further states that the pending sale is "a violation of the United Nations Declaration on the Rights of Indigenous Peoples."

Posted by UCTP TAINO NEWS at 10:38 AM No comments:

Bronx, NY (UCTP Taíno News) – On October 9, a diverse group gathered at Clason Point Park peninsula in the Bronx, NY to pay homage to the Siwanoy with a land acknowledgment ceremony, storytelling, and music. The gathering was led by Taíno community member Caridad de la Luz, also known as La Bruja, in collaboration with Pepatián: Bronx Arts Collaborative. The program manifested under the title “Bronx Indigenous Futurisms” and sought to raise the visibility of Clason Point’s Indigenous history as well as acknowledge “Indigenous Peoples Day.” Clason Point, known to the Siwanoy as "Snakapins," was the site of a large American Indian settlement comprising more than seventy dwellings.

Leading the ceremonial portion of the gathering was Behike Miguel Sague, a   founder of the Caney Indigenous Spiritual Circle. Sagua's Taíno lineage   originates in Cuba. Elder Sague is also the United Confederation of Taíno   People’s Ambassador to Cuba. Lonnie Harrington, of Seminole heritage,   was  also a featured presenter who also shared songs that encouraged those   gathered to join the circle and dance.

Also addressing the gathering by invitation was the President of the United   Confederation of Taíno People (UCTP), R. Múkaro Agüeibaná Borrero who   attend with his spouse, Joselyn Borrero (Tlingit). Borrero, who is also a   Kasike (chief) of the Guainía Taíno Tribe, presented a special gift to Caridad   de la Luz in recognition of her efforts and on behalf of the UCTP.

The program also featured an installation dedicated to Indigenous Women and a plaque dedicated to the Siwanoy was added to one of the park benches overlooking the water, which is the confluence of the Bronx and East Rivers.
UCTPTN 10112021
Posted by UCTP TAINO NEWS at 4:40 PM No comments:

New York, NY (UCTP Taíno News) - The Seventh Annual Indigenous Peoples Day NYC commemoration will take place on Randall's Island on October 10th from 11:00 AM - 9:00 PM - October 11th from 7:00 AM - 2:00 PM. The Indigenous-organized and Indigenous-led event will feature cultural performances, guest speakers, artists vendors, a pop-up fashion show, and a nighttime concert. On Sunday, there also will be a sunrise ceremony followed by a water ceremony.

Among the cultural presentations featured at the event will be a presentation by members of the Kasibahagua Taíno Cultural Society on Sunday. At the evening concert on Saturday, Brother Mikey, a member of the Guainía Taíno Tribe will share his music.

"Music is leading me back to my indigenous Taino roots and back to the Mother Earth" said Brother Mikey.
The organizers of the event are requesting donations. The United Confederation of Taíno People is one of the official co-sponsors of Indigenous Peoples Day NYC.
UCTPTN 10082021

Posted by UCTP TAINO NEWS at 9:55 AM No comments:

Newton, Massachusetts (UCTP Taíno News) - Following a legislative recent action by the Newtown City Council, a committee has been formed to organize and commemorate the first annual Indigenous Peoples Day in Newton, MA. Co-founding the organizing committee are two Taíno women, Chali’naru Dones, a member of the Guainía Taíno Tribe, and Dr. Darlene Flores of the Higuayagua Union.
“It is very encouraging and a source of pride to see Taíno women taking a lead on Indigenous Peoples Day in Newton” stated R. Múkaro Borrero, President, United Confederation of Taíno People (UCTP). “The Confederation supported Newton’s official recognition of Indigenous People Day and presented testimony during the public hearing process.”
The United Confederation of Taíno People is an official co-sponsor of the Indigenous Peoples Day, Newton, which will take place on October 11, 2021, at Albemarle Park in Newtown from 12-5:00 PM. Tai Pelli, a representative of the United Confederation of Taíno People, is confirmed as a keynote speaker.
Indigenous Peoples Day in Newton promises to be a family-oriented cultural and spiritual celebration featuring musical, dance, and spoken word performances. The organizers are also planning a Talking Circle facilitated by Indigenous elders, immersive educational cultural exhibits, and a market featuring Indigenous artists and community groups.
Donations are being accepted to support the program and its associated costs.
UCTPTN
Posted by UCTP TAINO NEWS at 12:58 PM No comments:

UCTP Taíno News - The first World Conference of Indigenous Women took place in-person in Lima, Peru, but this year, in August, the conference will be held online out of concern for the health of all participants and observers. The conference begins on August 12 and will be held every Thursday in August  (8:00 AM - 12:00 PM) and end on September 2, 2021 (7AM - 10AM). Participants will discuss violence and reproductive health, education initiatives, climate justice, the use of Information and Communication Technologies (ICT), and economic empowerment.

The conference aims to bring together Indigenous women from seven socio-cultural regions including Asia, Africa, the Pacific, the Arctic, and the Americas. Tai Pelli, International Relations and Human Rights Officer for the United Confederation of Taíno People is a member of the Conference organizing committee. During the last session, elder Vivian Guara'naru DuMont of the Guainía Taíno Tribe is scheduled to provide a prayer for the last session.