Irish Town, Jamaica (UCTP Taino News) - In May 2007 the first official “Taino Day” was observed in Jamaica, however some Jamaicans would like to see more than a cursory nod given to the nation’s indigenous ancestors. Carol Miller a resident of Irish Town, St. Andrew hopes to facilitate the beginning of such a dialog this Saturday with a series of talks she is organizing on culture issues. The dialog series is entitled “Saturday Soup” and the first topic will address Jamaica’s “near forgotten ancestors” the Taino People.

Miller states that “in any given year our ancestral celebrations begin with the Accompong Maroons on January 6th, a day that celebrates the signing of the peace treaty with the British by Maroon leader Cudjoe. The celebration goes all day with never a mention of those who paved the way for the African maroons to take to the hills - the Tainos.”

She continues noting that “There is never discourse on the meeting of the two and the resulting integration of food, families and language.”

The Saturday Soup talks are open and will feature special topics and guests. Interested persons can contact the organizers at afuafofie@hotmail.com.

The United Confederation of Taino People's Office of International Relations and Regional Coordination (UCTP-OIRRC) has commended the initiative. "We need to support our relatives in Jamaica - this is one of our traditional homelands" stated UCTP representative Roberto Borrero. "We will do what we can to assist the organizers in the spirit of our ancestors."

Miller hopes that these discussions will help people make "historic, cultural, and spiritual connections” and that future national celebrations will do more to highlight the first Jamaicans. 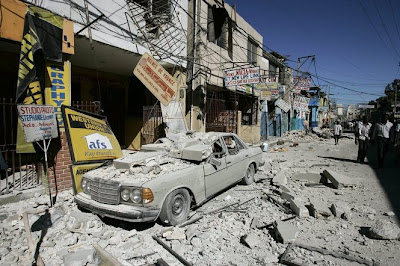 Port-au-Prince, Haiti (UCTP Taino News) – An earthquake with a preliminary magnitude of 7.0 struck outside of Haiti’s capital yesterday causing mass devastation, injury and death. Aftershocks continued today while a tsunami warning issued for countries with Caribbean coast has been canceled.

Government officials from Mexico, Venezuela, Panama, and the United States have already pledged assistance. Celebrities such as musician Wyclef Jean are urging fans to donate to earthquake relief efforts. “We must think ahead for the aftershock, the people will need food, medicine, shelter, etc." said Jean.

International and Regional aid organizations as well as grassroots efforts from Haiti’s Caribbean neighbors have begun to mobilize. The American Red Cross has already released $200,000 in aid and is working directly with the Haitian Red Cross in response.

Commenting on the disaster Roger Hernandez, a representative of the United Confederation of Taino People in Boriken stated “We have heard reports that hospitals are full and thousands have lost their homes.” He continued stating that “Our thoughts and prayers are with the people of Haiti.”

The UCTP has posted links on its website directly to the American Red Cross International Response Fund for donations.

The earthquake, reported to be its worst in 200 years, affects a country that is one of most impoverished in the hemisphere. Eighty percent of Haiti's population lives under the poverty line, according to the CIA World Factbook.
UCTPTN 01.13.2010
Posted by UCTP TAINO NEWS at 3:41 PM No comments: