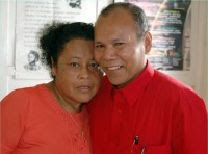 An hotelier, Williams had previously run for the office of Chief on four occasions but was unsuccessful. The new Chief polled 263 votes to beat outgoing Chief, Garnette Joseph, who received 182 votes.

The election of the Carib Chief is held every five years, and is followed by the election of a Carib Council under the Local Government Division. Chief Williams automatically assumes the Chairmanship of the Council.

According to the Caribbean News Agency, Williams said that it has been 25 years since he has been asking "the Carib people for an opportunity to do what I think needs to be done for the Carib Territory and the people".

"We are the rightful owners of Dominica and we need much more development. I want you to respect and understand that this country belongs to the Carib people and we want a better share", the new Carib Chief told reporters.

He also envisions a tax free existence for the Carib territory and calls on the authorities to declare the area a tax and duty free zone. One of his economic plans as well is the establishment of a financial institution to assist in the overall development of the territory.

Outgoing Chief Joseph stated he had accepted the decision of the Carib people.

"The people wanted a change, I listened to the comments that were made during the election campaign and the people were dissatisfied with the level of information that were reaching them so I believe the people felt that they needed somebody that could really bring out the information to them," he said.

The election of a Carib Chief followed the nomination of five persons on June 22 who were willing to contest for the position. According to the presiding officer at the election, Helius Auguiste, voter turn out was encouraging and slightly better than the last election in 1999.

The Dominica newspaper, The Chornicle reported that there was also an increase in the number of youth registered for the occasion this time around. There were six polling stations facilitating some 1,677 persons registered to vote. “I believe the activity went on quite well with the voter turn out good and it was nice seeing a good representation from the youth of the area exercising their democratic right at the polls,” Auguiste noted.

The British formally granted some 3,700 acres of common land to the Kalinago or Carib People in 1903 as well as “officially” recognizing the office of Chief.

Photo: The new Carib Chief of Dominica, Charles Williams with his wife Margaret.
Posted by UCTP TAINO NEWS at 1:17 PM No comments: