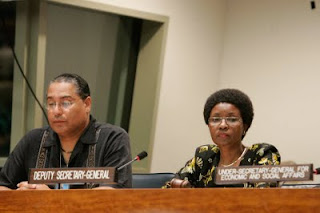 The event included messages from the United Nations Secretary-General, the President of the UN General Assembly, the Under-Secretary General for Economic and Social Affairs, and the Chairperson of the United Nations Permanent Forum on Indigenous Issues. There were also performances by indigenous artists, and a panel discussion on "Indigenous Peoples and HIV/AIDS".

In his message to mark the day, UN Secretary-General Ban Ki-moon emphasized the vulnerability of indigenous peoples to HIV/ AIDS. “It is essential that indigenous peoples have access to the information and infrastructure necessary for detection, treatment and protection,” he noted.

Other observances for the UN Indigenous Day were held around the world with events celebrated in Suriname, Brazil, Northeast India, Nepal, and Geneva among others.

Waitukubuli/Dominica (UCTP Taino News) - Elections were held in July in the Carib territory of Dominica, West Indies to choose a Chief for a new 5-year term of office. Former Chief Garnet Joseph won the election over incumbent Charles Williams.

Joseph said his work focus will include health, education and respect for council members in the Territory. The new chief has also pledged to bring more development to the 3,800-acre (1,538-hectare) territory, where Caribs live in greater poverty than the rest of the country. Dominica is home to about 3,000 Caribs, or ethnic Kalinagos.

Responding to the news from Boriken (Puerto Rico), Roger Guayacan Hernandez stated that Méndez “was well-respected both in New York and Boriken for being a true pioneer for women's issues and family rights."

Hernandez, a Liaison for the United Confederation of Taino People also noted that the former Senator “was well-versed in local history and she supported the efforts of the UCTP”.

Born in Mayagüez, Boriken on Feb. 5, 1925, Mendez moved to New York City in the 1950s. She was proud of her heritage and insisted on being known as Puerto Rican and rejected the terms Hispanic and Latino.