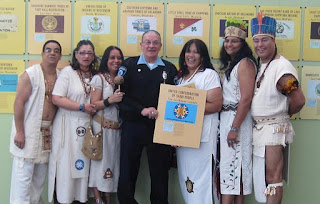 See the full story at UCTP Taino News at:
http://www.uctp.org/index.php?option=com_content&task=view&id=689&Itemid=2

Posted by UCTP TAINO NEWS at 12:37 PM No comments: 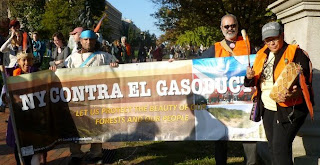 Taino activists among the thousands protesting the proposed Keystone XL tar sands pipeline in D.C on Sunday.
Washington, D.C. (UCTP Taino News) - On Sunday Nov. 6, more than more than 12,000 activists of diverse backgrounds from across the United States and Canada gathered at the White House to call on President Obama to stop the TransCanada Keystone XL tar sands pipeline. Following a well-attended rally in Lafayette Square, attendees formed a giant human chain several people deep completely encircling the White House. Among the protesters present, were delegations of Indigenous Peoples from throughout the U.S., Canada and beyond.

Posted by UCTP TAINO NEWS at 10:37 PM No comments:

UCTP representatives and friends have an information table on Taino culture at the American Indian Association Pow Wow in Orlando, Florida this weekend...

If you are in the area come down and say hello and enjoy the event!

You can get more information at this link:
http://www.uctp.org/index.php?option=com_events&task=view_detail&agid=234&year=2011&month=11&day=04&Itemid=58 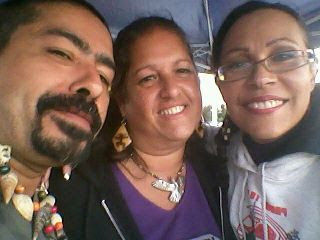 In this photo is our brother Abawarucoel, Mamona, and AnaYuísa...
El Taino vive!