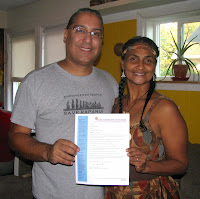 St. Thomas (UCTP Taino News) – Opia Taino and the United Confederation of Taino People (UCTP) finalized a collaborative agreement linking their respective local and international tribal registries.  An indigenous organization based in St. Thomas, Opia Taino will now commence its registry on the island and other nearby islands such as St. Croix and Tortola.

The St. Thomas Taino registry will connect directly with the UCTP’s Taino Population Census and Inter-Tribal Registry. These programs are independent of State government census or similar programs. Both registries are open to Taino, Carib, and Arawak descendants. UCTP president, R. Mukaro Borrero and Opia Taino president Maekiaphan Phillips finalized the agreement in a meeting last week in New York.

Trinidad & Tobago (UCTP Taino News) – Under the theme “exploring heritage, consolidating traditions, and creating a legacy” First Peoples Week was celebrated in Trinidad and Tobago from October 11-19, 2013. The celebrations raised the visibility of Trinidad’s Indigenous Peoples, as well as other Indigenous Peoples from around the Circum-Caribbean region.

The final day of the scheduled activities included a meeting of the Caribbean Organization of Indigenous Peoples (COIP). The meeting was held at the newly expanded Santa Rosa First Peoples Community Center in Arima. During the historic proceedings COIP officially welcomed its newest member, the United Confederation of Taino People.