Lima, Peru (UCTP Taino News) - Lokono Arawak leader Damon Corrie attended the UN Climate Conference (COP21) Regional Consultation for Latin America and the Caribbean in Lima, Peru from 12-15 October 2015. The consultation sought to consolidate regional positions on Climate Change, which would add to outcomes of similar consultations being conducted around the world. The Indigenous Peoples Global Climate Change Consultations are an initiative of the International Indigenous Peoples Forum on Climate Change (IIPFCC) in cooperation with the United Nations Development Programme (UNDP). Corrie was the only indigenous representative from a Caribbean Small Island State in attendance. Speaking on behalf of the Caribbean Amerindian Development Organization (CADO) and the United Confederation of Taino People (UCTP) Corrie expressed concerns of Indigenous Peoples of Caribbean small islands including global sea level and temperature rise, increasingly intense hurricanes and tropical storms, food sovereignty, and unusual rain and drought patterns. Chief Corrie intends to be present at and share these concerns, among others, at the 21st Conference of the Parties of the United Nations Framework Convention on Climate Change (COP21), which will take place in Paris, France 30 Nov. - 11 December 2015. 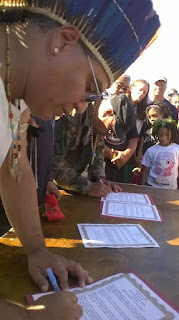 Ramapough Lenape Sachem Dwaine “Maqua” Perry and Roberto “Mukaro Agueibana” Borrero, the president of the United Confederation of Taino People (UCTP) were the main signatories of the treaty with a number of tribal members acting as witnesses.

Sachem Perry remarked on the importance of this level of recognition and solidarity between Indigenous Peoples. President Borrero highlighted the spiritual significance of signing the document on October 12. Both leaders looked forward to more Nations and Peoples affirming their solidarity in this way in the near future.

“Today we honor their legacy as a noble and harmonious people who remain our neighbors,” Councilman Vallone said.

“Long before the arrival of Europeans, the Matinecock Tribe called the areas of what is now Douglaston and Little Neck home” stated Assemblyman Braunstien.

In solidarity with the Matinecock and their Chief Osceola Townsend, various representatives of other indigenous Nations were attendance at the historic event including Chief Harry Wallace of the Unkechaug Nation and Roberto “Mukaro Agueibana” Borrero, President of the United Confederation of Taino People and chief of the Guainia Taino Tribe.

The Matinecock are a branch of the Algonquin Indigenous language and cultural group, and once inhabited villages where Flushing, College Point, Bayside and Douglaston now stand.