On Sunday September 15th, the Caribbean Community opened the first Regional Reparations Conference at St. Vincent and the Grenadines' Victoria Park. The Conference was mandated by the historic, unanimous, decision of CARICOM Heads of Government in July, 2013, in Trinidad and Tobago. The Heads of Government also requested each CARICOM Member State to set up its own National Reparations Committee to document the effects of European genocide against the indigenous inhabitants of the region, the slave trade in and the enslavement of Africans, and the colonization of the country.

The evening began with the unprecedented singing of St. Vincent and the Grenadines' national anthem in both English and Garifuna. The huge gathering was welcomed by Mr. Jomo Thomas, Chair of the Reparations Committee of St. Vincent and the Grenadines. Remarks were delivered by Dr. the Hon. Ralph Gonsalves, Prime Minister of St. Vincent and the Grenadines, and by Hon. Stephen Lashley, Minister of Culture, Sports and Youth of Barbados on behalf of Prime Minister of Barbados, the Hon. Freundel Stuart, who is also Chairman of the Regional Ministerial Committee on Reparations. Dr. Verene Shepherd, Chair of the Jamaican Reparations Committee, gave the keynote address in which she recited the names and ages of many of the victims of the atrocities committed by the Europeans during slavery. Dr. Shepherd also emphasized the underreported fact that African women were integrally involved in all aspects of the resistance to slavery. Between speakers there were poetry and drumming performances.

The evening ended with a sterling performance in support of reparations by the legendary artist and Grammy Award Winner Hon. Bunny Wailer and his band who embodied the slogan "Culture as a Weapon."  Bunny’s repertoire comprised of a number of songs that sunk home the message of the plight of the black man suffering under colonial domination in a foreign land.

The second day of the conference started with a historical review of enslavement in the Caribbean by Professor Sir Hilary Beckles, a leading historian on the issue of Slavery and Reparations and Principal of the UWI Campus at Cave Hill in Barbados. Dr. Beckles framed the task ahead by highlighting several issues discussed in his book "Britain's Black Debt".  Dr. Beckles mentioned the importance of including the diaspora in rectifying the effects of the European slave trade in Africans. Dr. Beckles was able to bring out the dehumanization as well as the criminal actions of those involved in Slavery in the Caribbean.  What became clear was the horrifying reality of the trade in Africans and further, their enslavement in the Caribbean. It was noted by Dr. Beckles that upon the abolition of slavery, European slave owners were paid reparations while nothing was paid to the newly freed.

Presenters from various countries described the composition of reparations committees in their home countries, and the state of public opinion on the issue.  Some key areas covered related to the middle passage, deportation, wealth generated through slavery, and the depopulation and underdevelopment of Africa and the Caribbean as a result of enslavement.

It was mentioned that CARICOM should mandate reparations education in schools' curriculum.  Recognition was also given to past reparations initiatives, such as the work done by the Rastafari Movement and some major reparations conferences that have occurred in Nigeria, Washington DC, and Barbados.

On the third and final day of the Conference, a structure was proposed for the regional Commission. It was agreed that the body would be led by a Chairman and three Vice Chairs with responsibility for certain key tasks. Professor Hilary Beckles was elected as Chairperson of the CARICOM Regional Reparations Commission. Vice Chairs are Jomo Thomas, St. Vincent and the Grenadines ( responsible for inter-governmental relations), Dr. Verene Shepherd, Jamaica ( research), and Ahmad Zunder, Suriname, (mobilization).

The CARICOM Reparations Commission was constituted to achieve the following aims and objectives:

Assume the responsibility for the preparation and presentation of the legal case for Reparations and highlight the special case of Reparations for Haiti;

Serve as a quick response mechanism and develop a pro-active media campaign to raise public awareness and canvas support.

There were also presentations and discussions  on legal strategies for a successful reparations claim.  The legal presentation was done by the UK law firm of Leigh Day & Co. and it was evident that this effort would require a regional consortium of experts in law, research and academia. It was also emphasized that any legal effort must be coupled with the mobilization of our people and an intensification of the political and diplomatic outreach that has already begun.

It should also be noted that in addition to the governmental deliberation and decisions, the representatives of civil society organizations held their own caucus and made the historic decision to establish a Pan-Caribbean Civil Society Reparations Network.  The network was mandated to mobilize the Caribbean people in support of the quest for reparations, and to collaborate with and support the work of the National Reparations Committees and the CARICOM Regional Commission.

Participants considered that the conference was the first step in a series of conferences and workshops that were necessary to continue the reparations effort. It was agreed that a website should be created as a focal point for ensuring that information on the work of the Regional Commission and national committees/task forces was made readily available. It was further agreed that national committees/task forces would create facebook pages to highlight the progress of their work.

The Conference ended with a resolve to have a second follow-up conference within a reasonable time-frame to ensure that the momentum started in St. Vincent and the Grenadines could be accelerated.

What was absolutely clear was that not since the Caribbean struggles for independence has the Region embarked on a journey of such magnitude and import for the future development of the people and region!

As we go forward, local committees have been urged to start the education and mobilization process in their own countries. For those who have not yet set up reparations committees they are being urged to do so quickly and to lean on the experiences of those who have already done so in the interest of efficiency and speed.

The Prime Ministerial Committee on reparations will quickly ratify the terms of reference adopted by the Regional Reparations Commission so that this commission can move ahead with the task that has been set before it.

It is hoped that the work in all countries would be advanced enough by the end of this year to enable a letter to be sent to the European countries being targeted for reparations to at least seek to begin a conversation on the issue with them.

The Conference had representatives from 12 CARICOM countries namely: Antigua and Barbuda, Barbados, Belize, Dominica, Grenada, Guyana, Jamaica, St. Kitts and Nevis, St. Lucia, St. Vincent and the Grenadines, Suriname and Trinidad and Tobago. There were also representatives from Guadeloupe, Martinique, US Virgin Islands, the UK, Canada, the United States and the Netherlands.
Posted by UCTP TAINO NEWS at 12:06 PM No comments:

Taino Among honorees at Gerald Ford Presidential Library and Museum 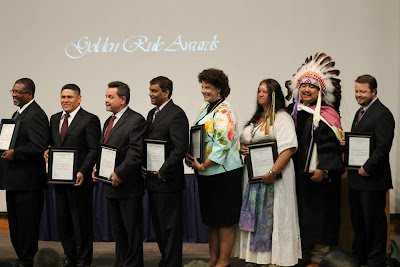 Grand Rapids, Michigan (UCTP Taino News) - Representatives of the United Confederation of Taino People, Monika Mamona Ponton-Arrington and R. Múkaro Borrero, were among the honored recipients of the Golden Rule International Award on August 30, 2013. This prestigious humanitarian honor was presented to these individuals, who for the organizers exemplified the Golden Rule – “treat others the way you want to be treated” - and demonstrated a sincere commitment, working toward a culture of peace, harmony, and constructive dialog among peoples.

The awards were presented by the Interfaith Peace-Building Initiative (IPI), a United Nations accredited non-governmental organization, and the Committee Leaders of the Golden Rule International. The event was held at the Gerald Ford Presidential Library and Museum in Grand Rapids, Michigan.

Ponton-Arrington stated, “It was an honor to be among so many distinguished humanitarians from around the world, and it was truly a humbling experience to be included among this esteemed group.” Ponton-Arrington also accepted the awarded on behalf of Borrero.


Additional presentations were made on behalf of Kayiwa International University in Uganda, which awarded Honorary Doctorate Degrees to former Crow Nation Chairman Cedric Black Eagle and Roberto Múkaro Borrero of the United Confederation of Taino People.