Memo to the Media: Puerto Rican Is Not a Race

Time magazine said it. So did CNN. The New York Times said it, too.

In fact, without exception, every major United States media outlet has, in one way or another, reported on Republican (and other) fears of Supreme Court justice nominee Sonia Sotomayor's potential for "racial bias," given her Puerto Rican ethnicity and her now infamous comments about a "wise Latina" making better choices than a "white man."

I've watched it all as I watch so much of what passes for journalism in my beloved, forgetful country - which is to say with a mixture of concern, annoyance, and indigestion.

Astoundingly, not one media outlet has bothered to report what, to me, is a glaringly obvious omission in the discussion about Sotomayor and race: Puerto Ricans, like all other Hispanics/Latinos, can be of any race, and are. Latinos/Hispanics are not a racial group, according to our own Census Bureau, which, incidentally, created the amorphous (and many might argue, false)category in the 1970s.

The term Hispanic can be applied to anyone with any ancestry of any "race" in any place in the world where people either once spoke Spanish (like the state of Colorado) or currently speak Spanish. Latino encompasses all of that, and also adds to the mix anyone else in Latin America, where there are nations that speak Portuguese, Dutch, English, French and dozens of Native American tongues.

In Sotomayor's case, this unfounded fear of reverse racism is patently absurd when one considers the history of Puerto Rico, the land of her ancestry. Cheek swabs from the local population reflect what history illustrates, which is that Puerto Rico is one of the most racially diverse places on earth. Just as there is no single Hispanic/Latino race, there is no Puerto Rican race, either; there are many.

When Cristobal Colon (Christopher Columbus to some of us) landed on the island that is now known as Puerto Rico in 1492, he "discovered" at least 60,000 Arawak or Taino Indians already living there. According to Columbus's own diaries, he and his European cohorts were mortified by the nakedness of the Indians, and by their generosity and unwillingness to understand the concept of, you know, owning stuff. Their lack of Catholicism proved problematic, too. In short order, nearly all of the Indians in Puerto Rico were enslaved and slaughtered in thename of Jesus; most died.

The European settlers (aka white men) then imported slaves to the island from West Africa, though to a lesser extent than in Haiti and Jamaica, where as much as 90 percent of the population by the 19th century were of African descent. The census in Puerto Rico in 1834 showed that 11% of the population were African or Indian slaves, 35% were colored freemen and 54% were white.

The subsequent history of Puerto Rico was, therefore, not all that different from the history of, say, Louisiana, or Alabama, except that the genocide and slave-owning happened in the European language of Spanish rather than the European language of English or French. Spanish, contrary to the pontificating of Lou Dobbs and Michael Savage, is not native to Latin America.

But somehow, in the magical world of American identity politics, all of this history is conveniently forgotten - or worse, never learned - in the discussion of Puerto Rico, Sotomayor, and race. Suddenly, in the scary America inhabited by most Republicans and worried white men, we have a Latino/Hispanic "race" that, in addition to being hot, spicy and, oh, I don't know, passionate and volatile (keywords often employed by the media in discussing us), is magically removed from the white, black and Indian races that make up the history of all of the Americas. Suddenly, white male Republican types fear that a Puerto Rican woman is going to be racist against white men, even though white men were the very people who colonized Puerto Rico, and even though it would be difficult to find a racially whiter man than, say, Ricky Martin, and even though Puerto Rico is full of white men, and black men, and brown men, etc.

Sotomayor's own ignorant comments - and I am pleased to see she recanted this week for the idiot statement about "a wise Latina" - seem to have been steeped in the myth of a single Latino/Hispanic race or, for that matter, ethnicity. I can only assume that one as educated and wise as Sotomayor makes such remarks to appease ignorant masses of Americans, Latino and otherwise, who simply don't know better and wouldn't understand it if you explained it all to them. For every American who is terrified by the mythological notion of a Latino/Hispanic race, there is another American who is proud of it. In America, as elsewhere, erroneous perceptions, repeated enough times, can unfortunately become the dominant understanding of a misunderstood reality, in spite of history and all the ghosts who wish to tell us their stories.

Puerto Rico, like the rest of the Americas, is a complex, multiracial, multicultural place. The people there have a complex and fascinating history, including a difficult relationship with the United States that, if anything, should be the one issue giving any Republican true pause.

That Sotomayor might harbor some bias based upon her Puerto Rican-ness is not an unreasonable thought; we all harbor some biases based upon our backgrounds - it is just that certain people's biases get to be called "truth" while others' getto be called "militancy". But a Puerto Rican bias would not necessarily be a racial one. Colonial? Perhaps. Economic? Maybe. Nationalistic? Perchance. But not racial.

There is no more a Puerto Rican race than there is an American one.
Author: Alisa Valdes-Rodriguez
Source: http://www.alternet.org/
Posted by UCTP TAINO NEWS at 10:25 AM 1 comment: 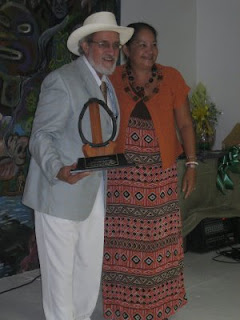 Jayuya, Boriken (UCTP Taino News) – On the occasion of his 50th Anniversary in the arts, Miguel Ángel Guzmán was honored by family, friends, artists, and supporters in a reception held at Galeria Maboiti in Jayuya. The July 2nd event featured selected art-works from Guzman and artist Olga Reyes.

Among the attendees were the honorable Mayor of Jayuya Georgie Gonzalez, representatives of the Institute of Puerto Rican Culture, CATTA-COOP, and the Boriken Liaison Office of the United Confederation of Taino People.

In honor of the special occasion, the UCTP Liaison Office presented Guzman with a specially designed Taino “cinturon” commemorative sculpture and a donation to support the arts education workshop he developed with Reyes at their Galeria Saguay in Paso Palmas, Utuado.

On behalf of the UCTP Liaison Office, Eva Tona Lazu expressed her appreciation of Guzman and Reyes' dedication and she looked forward to their continued success.

The special exhibition and reception was hosted by the Office of Mayor Gonzalez who declared Miguel Angel Guzman "an honorary son of Jayuya."

Honduras (UCTP Taino News) - While world watches events unfold around the recent political coup d'etat in Honduras, Indigenous Peoples of the country are calling for the return of deposed President Manuel Zelaya. National indigenous organizations such as the Civic Council of Popular and Indigenous Organizations of Honduras (COPINH), the Indigenous Coordinating Body of Mesoamerica and the Caribbean (CIMCA), and MASTA or Moskitia United, have all issued press releases concerning their opposition to Zelaya's forced removal from power.

Honduras is home to the Lenca, Miskitu, Tawahka, Pech, Maya-Chorti, Tolupan, Garifuna, Creole, Nahoa, and Chorotega peoples. Reports from local indigenous leaders assert that they are being prevented from protesting and being targeted for persecution by the coup leadership. Zelaya's indigenous supporters also contend that real motive behind the coup was that the opposition feared plans for a new constitution that could provide more rights and protections to Indigenous Peoples and other Hondurans.
UCTPTN 07.13.2009
Posted by UCTP TAINO NEWS at 5:48 PM 1 comment: