The Native Women's Association of Canada is co-hosting the 3rd ILSA with the Assembly of First Nations and Indigenous Partner Organizations throughout the Americas. More information is available in the information bulletin. Further, we are seeking input into our discussion paper that outlines the framework of the Declaration and Plan of Action that will be finalized at the 3rd ILSA. To provide feedback please contact Céleste McKay.

Posted by UCTP TAINO NEWS at 11:13 AM No comments: 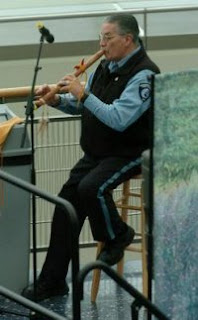 Connecticut (UCTP Taino News) – This month, the United Confederation of Taino People (UCTP) welcomed Hector “Baracutey” Gonzalez as its Liaison Officer in the State of Connecticut. A Boriken Taino whose family comes from Puerto Rico’s Aibonito, Orocovis, Naranjito and Coamo areas, Gonzalez will be responsible for UCTP outreach in Connecticut.

Since 1996, Gonzalez has been working for the Mashantucket Peqout Tribal Nation as a Security Enforcement Officer under the Mashantucket Pequot Tribal Police Department. A veteran, Gonzalez started his military service in Boriken (Puerto Rico) with the old 65th Infantry Div. (Ranger) Army National Guard in Camp Tortugero, in Vega Baja. Later he served with the U.S. Army Special forces as a Light Weapons Specialist and a Medic. Gonzalez did 2 tours in South East Asia and during tours as a medic he was an adviser to Indigenous communities in Central and South America.

On his creative side, Gonzalez plays the Native Flute and makes them only for children who have a terminal illness at no charge to their family. He continues to visit middle and high schools to educate students on Taino culture.

Contact information for Hector Baracutey Gonzalez will soon be made available at the UCTP webportal at www.uctp.org.

Guatemala, Mar 9 (Prensa Latina) - More than five centuries of notable Cuban women were represented in the Guatemalan Embassy on the occasion of International Womens Day.

Women and the Homeland is the name of the exhibition of several portraits by Antonio Guerrero, one of five anti-terrorists jailed for more than 10 years in the United States.

There are images of the Taino aborigine Casiguaya, the wife of Hatuey the first martyr for the liberation of Cuba who opposed Spanish colonization that continues to women internationalists of today.

Notable among the portraits are Mariana Grajales and Leonor Perez, mothers of the national heroes Antonio Maceo and Jose Marti, respectively, Vilma Espin, heroine of the Revolution and founder of the Cuban Women’s Federation and Mirtha Rodriguez, mother of Guerrero.

They are all great women of their time, forgers of the future, examples of combatants for a better world, declared the political attaché of the embassy, Santiago Feliu.

Nicaraguan Marta Guadalupe Romero and the Guatemalan Silvia Solorzano spoke of the situation of women in Central America.

Among their challenges are access to education and health, equality of gender and a greater participation in posts of political decisions.

The event had the participation of representatives of different solidarity with Cuba organizations, friends of the Revolution and accredited diplomats in the country.

New York (UCTP Taino News) - Bolivia’s Permanent Mission to the United Nations has announced plans to introduce a draft resolution to the UN to create “International Mother Earth Day." If approved by UN Member Countries, Mother Earth Day would be celebrated each April 22nd. The concept for the day is based on the broad notion that that all people must strive to live in harmony with nature and one another in order to avoid crises such as global warming.
With this proposal, Bolivia hopes to pay homage to the intimate relationship that many cultures see as existing between humans and the environment. Although April 22nd is currently known as “Earth Day” it is not officially recognized at the United Nations. Bolivia asserts that International Mother Day would not conflict with Earth Day as it is celebrated in approximately 170 nations.

In solidarity with the proposal, the Chairman of the NGO Committee on the UN International Decade of the World’s Indigenous Peoples, Roberto Borrero (Taino) stated “promoting a sustainable relationship with the environment is a positive initiative that all people can embrace.”

According to the Bolivian Mission, the celebration of the “International Mother Earth Day” would focus on raising public consciousness about climate change, biodiversity, and other environmental issues in order to benefit the future generations of all regions and countries. 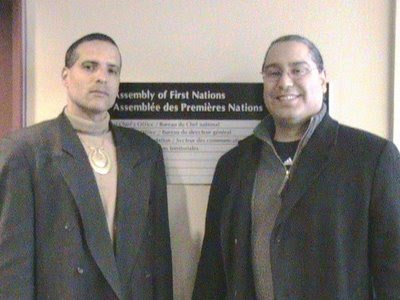 Damon Corrie and Roberto Borrero at the offices of the Assembly of First Nations in Ottawa, Canada (UCTP Photo)

Ottawa, Canada (UCTP Taíno News) – A planning meeting for the upcoming 3rd Indigenous Leaders Summit of the Americas was held February 27-28, 2008 in Ottawa, Canada. The meeting was hosted by the Assembly of First Nations (AFN) and the Native Womens Association of Canada.

The Indigenous Leaders Summit will present a Declaration and Plan of Action to the 5th OAS Summit of the Americas that will be held in Port of Spain, Trinidad from April 17 – 19, 2009.

The Summit location has not yet been confirmed, but current choices location choices include Venezuela, Panama, and St. Lucia. Trinidad is also being considered but as a result of the OAS Summit, logistics could present a problem. While the cost and other factors will determine the actual meeting site, members of the local indigenous community are still hopeful that the Indigenous Summit will come to Trinidad.

“To not have this meeting in Trinidad would be a shame” stated Chief Ricardo Bharath Hernandez of the Santa Rosa Carib Community. Currently, the Santa Rosa Community is the only community on the island recognized by the government of Trinidad and Tobago.

Close to 100 hundred indigenous leaders from throughout the hemisphere are expected to attend the meeting. Participants will be representative of 4 regions – South America; Central America & Mexico; North America (U.S.A & Canada ); and the Caribbean with about 20 participants per region.

Corrie was appointed to head the Communications Sub-Committee while DeTerville and Borrero will work with the Technical Committee. Outreach has already been circulated in the Caribbean Region for the delegate nominees.

Burials excavated at the earliest European settlement in the New World, established by Christopher Columbus in 1493, have surprised archaeologists by including women and children. It had been thought from documentary evidence that the settlers had all been men.

La Isabela, on the north coast of Hispaniola, in what is now the Dominican Republic, was founded by Columbus, pictured below, late in 1493 on his second voyage. The camp at La Navidad, now in Haiti, established on his first voyage in 1492, had been abandoned by the time he got back, and he moved eastwards along the coast of Hispaniola until he found a suitable location for a permanent settlement.

Substantial traces of La Isabela survive, including Columbus's own house and the foundations of a church, all enclosed within a defensive wall. Next to the church, consecrated in January 1494, was a small cemetery in which the casualties of confrontation with the Taino were buried, together with those who had died of famine, diseases and exhaustion.

New excavations in the cemetery by a team of Dominican, Italian and Mexican archaeologists and biological anthropologists have recovered nearly 50 skeletons. What surprised the investigators was that the burials included at least five children of different ages, as well as four women.

One woman was clearly European, while a second seems to have been a Taino, because of her culturally shaped skull, modified by cradle-boarding in childhood. Metabolic diseases, broken teeth and physical stress due to heavy labour were noted in the skeletons, but there was no sign of syphilis or yaws: if any of the settlers had acquired such diseases, they had not yet progressed enough to show in the bones.

There was also no sign of battle wounds, suggesting that relations with the Taino had not produced early casualties.

DNA analyses and isotopic studies of diet are in progress, and the team hopes to find out whether Columbus's crew included Africans: recent studies in Mexico have shown a surprisingly early African presence in early burial grounds in Yucatán.

Author: Norman Hammond
Source: The Times Online
Posted by UCTP TAINO NEWS at 11:29 AM No comments: