Confederation Raises Visibility of the Taino Language at the United Nations

Posted by UCTP TAINO NEWS at 4:49 PM No comments:

West Haven, Connecticut (UCTP Taino News) – On December 31, 2015, Angel Ortiz was appointed a Liaison Officer in the State of Connecticut by the President of the United Confederation of Taino People, Roberto “Múkaro Agüeibaná” Borrero following final approval by the UCTP’s Governing Board. Liaison Officers serve as focal points for the Confederation in their designated areas of responsibility. Angel Ortiz now serves in this distinguished post along with Hector Baracutey Gonzalez.

Ortiz is a Borikén Taino born in the city of Ponce, Puerto Rico. He is a member of Taino iukaieke Guainia and has resided in Connecticut since 1985. Oritz has a Bachelors Degree in Counseling, and has worked with patients suffering from Mental Health illness. He currently serves in the United States Team Coast Guard / Department of Homeland Security as Seaman, working on Search and Rescue Operations for Sector Long Island Sound; and represents the United States Coast Guard Academy in New London, Connecticut, as Academy Admissions Partner. Oritz currently lives in West Haven with his wife Carmela.

Hialeah, Florida (UCTP Taino News) - CLIMA, an exhibition by world-renowned artist Xavier Cortada opened in the city of Hialeah on November 30 and will run until January 29, 2016 at the Milander Center for Arts and Entertainment. The exhibition uses art, performances and panels to address the issue of global climate change and sea level rise and how it impacts South Florida. A key component of the exhibit was 12 panel discussions on global climate change during the 12 days of the Paris Talks - from Nov 30 - Dec 11. Each panel concluded with a performance art piece addressing a topic presented in the panel.

On Sunday, December 6, the guest panel entitled “Moral Nature: Faith in the face of a Global Climate Crisis” included Mildred Karaira Gandia (Taino) along with a diverse ecumenical group. The panelists discussed the faith community’s response to environmental degradation, and particularly its impact on the poor and generations not yet born.

"The one thing that everyone on the panel agreed on was that in order to protect Atabei (Mother Earth) and our future generations, we all need to work together regardless of religion, color, etc." stated Gandia. 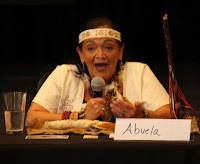 She continued stressing that "we all have something to contribute and this crises cannot be solved by anyone alone".