Guzmán Celebrating 50 Years in the Arts

Utuado, Borikén (UCTP Taíno News) – Celebrated artist and elder community member, Miguel Angel Guzmán will be featured in a special exhibition honoring his 50 years in the Arts. The exhibition will be held at Galeria Maboití, Museo del Cemi in Cedetra, Jayuya. The exhibit will open on July 2 at 6pm with a musical presentation by Guzmán and a reception. The honorable Georgie Gonzalez, the Mayor of Jayuya will host the event.
Born in Barrio Caníaco in Utuado in 1939, Guzmán recently celebrated his 70 birthday in Utuado at a special gathering attended by local artists, friends, and supporters including representatives of the Consejo General de Tainos Borincanos and the UCTP Borikén Liaison Office.

UCTP Taino News – As part of the island of Bermuda’s 400th anniversary celebrations, the St. David’s Island Community will host its fifth Native American Festival on Saturday June 20th and Sunday June 21st, 2009. Previous festivals were hailed as over-whelming successes locally and internationally. The special event is held on the St David’s County Cricket Field and it continues to grow with about 2000 local people attending.

The festival began as a project to reconnect St. David’s Native American descendants with their contemporaries from East coast areas of the United States. The historical record reveals that Indigenous Peoples were taken from the United States as well as from around the Caribbean region to Bermuda as part of the slave trade in the 1700s.

About 80 American Indian representatives have been invited to attend and participate in the cultural festival, which will highlight American Indian song, dance, story telling and craft making as well as local artisans.

Among the invited delegates, Mildred Karaira Gandia (Boriken Taino) will represent the United Confederation of Taino People at this historic anniversary event. Gandia will present an official statement to the gathering which is expected to include Bermuda’s Governor, his Excellently Sir Richard Gozney among other Bermudan government officials and dignitaries.

North of the Bahamas in the mid-Atlantic, Bermuda's settlement began in 1609. Contrary to popular belief Bermuda is not one island – but a string of islands now linked by causeways and bridges. 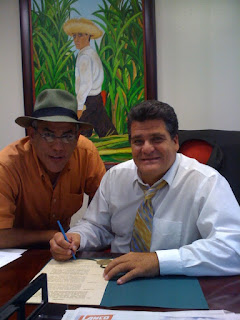 Ponce, Boriken (UCTP Taino News) – Representing District 25, Ponce – Jayuya, the Hon. Victor L. Vassallo Anadón this week urged the citizens and government of Puerto Rico and federal agencies to respect the island’s “sacred national patrimony” and the rights of the Taino People. The official statement was presented to the Boriken Liaison Office of the United Confederation of Taino People in the form of a proclamation displaying the seal of the Puerto Rican House of Representatives. The proclamation issued by Vassallo recognizes Taino People as pre-Columbian inhabitants of Puerto Rico whose descendants remain on the island today.

Free Screening of Quest of the Carib Canoe in LA

Los Angeles, California (UCTP Taino News) – As part of the “Bringing the Circle Together” Native American Film Series, the film “Quest of the Carib Canoe” will be featured at 7pm on Thursday, June 18, 2009 at the National Center for Preservation of Democracy (NCPD) in Los Angeles, California.

Directed by renowed filmmaker Eugene Jarecki, the film highlights the voyage of a group Kalinago Carib community members and supporters as they sail nearly 1000 miles in a traditionally made canoe from their home on the island of Dominica in the British West Indies to South America to rediscover their ancestral heritage.

Special guests for the evening include poet Kantuta and Cheryl Noralez of the Cheryl Noralez, a Caribbean Indigenous organization in LA that focuses on the preservation of Carib and African roots.

The free screening of ‘Quest of the Carib Canoe” will take place at the NCPD located at 111 North Central Avenue, between 1st Street and Central Avenue, in downtown Los Angeles. The NCPD can be reached via train, bus, or parking in the area. Films will begin at 7pm, and it is advisable to arrive at least 15-20 minutes prior for seating.

The “Bringing the Circle Together: A Native American Film Series” is a free monthly series established to present quality documentaries by and about Indigenous cultures of the Americas. 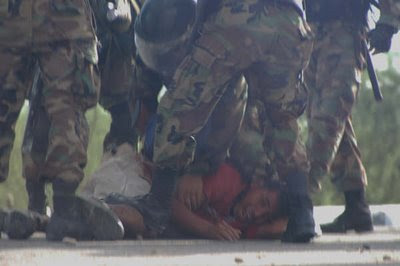 Posted by UCTP TAINO NEWS at 11:27 PM No comments:

San Juan, Boriken (UCTP Taino News) - The Puerto Rican Senate and House of Representatives are deliberating on the approval of revised Permit Law Projects that opponents state would endanger the Caribbean island’s environmental and archeological patrimony. Local archeologists, environmentalists, and indigenous Taino groups are calling on the government to abandon this process involving Permit Law Projects No. 880 in the Senate and No. 1649 in the House of Representatives.

The Permit Law Projects are being touted as much needed initiatives that would to re-structure and expedite construction permits on the island. As noted by several public statements made by those opposed to the projects, the proposed legislation would nullify current legal protections for environmental and archaeological resources while favoring development with little oversight.

Reyes Ocasio continued stating “This permit law proposal is a violation of the United Nations Declaration on the Rights of Indigenous Peoples, an international human rights law standard that calls for prior and informed consent.”

A demonstration calling on the government to abandon the current Permit Law Projects will be held tomorrow, Friday June 5 in San Juan, Puerto Rico. The event will begin at 11am at “Puente Dos Hermanos” in the Condado area where Ashford Avenue ends and leads into Old San Juan. For more information on the demonstration contact “Coalición Todo Puerto Rico Por Puerto Rico” at 787-274-8087, 787-502-0194 or bsantiago@alianzaseiu.org. 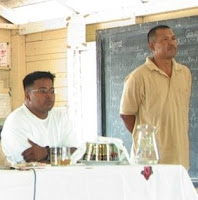 Pakuri Lokono Territory, Guyana (UCTP Taino News) - On Saturday May 30th 2009 democratic elections were held on the 2,000 person 240 sq. mile Pakuri Lokono Arawak Territory in Guyana, South America.
At Pakuri, 25% of the population is of voting age (18 years+), with 75% of the population of Pakuri being of 17 years or younger. The population of Pakuri has doubled in the last 16 years - up from a 1992 estimate of 1,000 persons; making it one of the fastest growing indigenous communities in Guyana.

Campaigning for the post of Chief were 3 Lokono-Arawak men - Telford Taylor, Mark Bernard, and Ernest Dundas.

Chief Dundas won with roughly 60% of the vote, Mr. Bernard came second with approximately 30%; and Mr. Taylor third with about 10% of the vote.

The community also democratically elected all 8 members appointed by Chief Dundas to form his Village Council - which is the Tribal Government of Pakuri Arawak Territory. The new council includes former Chief Pierre Andrews - who recently represented Pakuri at the 3rd Indigenous Leaders Summit of the Americas held in Panama, Central America.

The next elections at Pakuri are due to be held again in May 2012.
Photo: Pierre Andrews and Ernest Dunda in Pakuri Lokono Arawak Territory, Guyana
Reporter: Damon Corrie
UCTPTN 06.04.2006
Posted by UCTP TAINO NEWS at 3:23 PM No comments: