UCTP Taino News - The Assembly of First Nations (AFN) and the Native Women's Association of Canada (NWAC), have initiated a meeting to discuss the upcoming 3rd Indigenous Leaders Summit of the Americas (3rd ILSA). The primary goal of the 3rd ILSA is to precede and inform the Organization of American States’ 5th Summit of the Americas to be held in Trinidad.

Indigenous leaders from the Americas will participate in this event, including women, youth and Elder leaders from across hemisphere. A secondary goal is to continue the policy dialogue initiated in the first two Indigenous Summits and move this dialogue forward to focus on implementation of the measures necessary for the previous Declarations and Plans of Actions to be fully realized.

A preliminary ILSA Planning Committee meeting is scheduled to take place February 27-28 in Ottawa, Ontario, to be preceded by a teleconference call in the very near future.

Among the confirmed participants for the planning meeting is Roberto Mukaro Borrero of the United Confederation of Taino People (UCTP). Commenting on the meeting Borrero noted “as this international summit is taking place in Trinidad, this is an historic opportunity to increase the visibility of Caribbean Indigenous Peoples.”

Borrero also noted “Trinidad and Tobago is home to a recognized indigenous community and is the current Chair of the Caribbean Organization of Indigenous Peoples (COIP). It is more than appropriate for this reality to be highlighted before the international community who will be gathered at this event.”

The 5th Summit of the Americas is taking place from April 17-19, 2009 in Port of Spain, Trinidad and Tobago.

UCTP Taino News - The United Confederation of Taino People (UCTP) has added Facebook to its internet communications network. In its effort to increase the visibility of Taino and other Caribbean Indigenous Peoples, the Confederation continues to devote attention to the development of its online outreach capabilities.

“Along with ongoing development of our web portal at www.uctp.org, we have been making use of internet resources like Blogger, Yahoo, You Tube, My Space, and now Facebook to expand our outreach potential.” stated Ericc Ausubonex Diaz, the UCTP Director of Technology.

Using these types of resources the Confederation has successfully developed a web presence for the Caribbean Organization of Indigenous Peoples (COIP) with its headquarters in Trinidad as well as for the Consejo General de Tainos Borincanos and the UCTP’s Liaison Office in Puerto Rico.

“While the UCTP Facebook page has a little catching up to do with the pages on other networks, the trends are indicating that online social networks are becoming a more important source of media communication.” observed Diaz.

Beyond social networks, the Confederation is looking towards improvements on its webportal, the acquisition of its own dedicated server, and being involved in some ground-breaking technology initiatives with other indigenous partners. As part of the International Indigenous ICT Taskforce (IITF), the UCTP is the Caribbean content editor for www.indigenousportal.com.

Through its participation with the IITF, the Confederation is also supporting the campaign for a self-governing domain name for Indigenous Peoples. The “Dot Indigi” campaign a partnership between the IITF and the New Zealand Maori Internet Society (NZMIS) with the conditional support of World Intellectual Property Office (WIPO). The aim is to assist Indigenous Peoples around the world to be represented on the Internet in a space that is self governing, representative and restrictive of Intellectual Property abuses.

“The internet and the online revolution is here whether our communities are prepared for it or not” noted Diaz. “Recognizing this reality, the UCTP will continue to use internet and communications technologies as our ancestors have used other tools for the benefit of our people and all our relations.”
Posted by UCTP TAINO NEWS at 7:03 PM No comments: 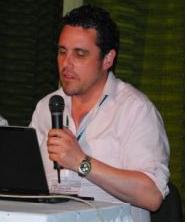 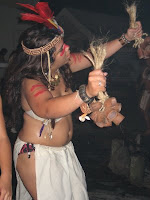 Hato Rey, Boriken (UCTP Taino News) - February 2nd is half way between winter and summer solstice and it is observed in a pre-hispanic and Catholic fusion celebration known as Dia de la Candelaria.

In an unfortunate turn of events, a social dance around the community fire was shockingly interrupted by a local fire department official who proceeded without respect to extinguish the center of this activity. Caught on video by local Univision television news crew covering this momentous celebration, the fire department representative was offered an on-camera orientation on the prehispanic observance of Dia de la Candelaria and the Taino cultural practice of lighting a large fire from which community members offer their tributes of thanks and practice a purification dance for the upcoming season.

The 11pm newscast was well edited and anchor desk commentary followed recognizing a growing resurgence of Taino cultural identity and ceremonial restoration projects throughout the island of Boriken.