Taíno Confederation joins the opposition to U.S. interference in Mexico’s phaseout of glyphosate and GM corn

Washington, DC (UCTP Taíno News) - Today, 80 U.S. organizations delivered a letter to US Department of Agriculture (USDA) Secretary Tom Vilsack and US Trade Representative (USTR) Katherine Tai, opposing the interference by U.S. government officials and agribusiness interests in Mexico’s planned phaseout of glyphosate and genetically modified corn. Signatories to the letter included representatives of Indigenous Peoples, American farmers, workers, consumers, public healths, sustainable agriculture, and other food systems research and advocacy groups. Further, over 6,900 petition signatures from concerned individuals were delivered as well.
As revealed by a Freedom of Information Act (FOIA) request by the Center for Biological Diversity, under the Trump administration, public officials at USTR and USDA strategized with agrochemical industry representatives from CropLIfe America and Bayer AG (which produces glyphosate) on ways to urge the Mexican government to rescind its policy decisions. After, USTR warned Mexico’s Minister of Economy that Mexico’s action threatened the “strength of our bilateral relationship.” 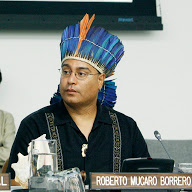 The United Confederation of Taíno People (UCTP) and the Caribbean Amerindian Development Organization (CADO) were signatories to the letter. UCTP President and CADO Co-President, R. Múkaro Borrero stated, "The COVID-19 pandemic has shown the world the importance of food security and food sovereignty at national and local levels. Moving toward a right relationship with food and the Earth should be at the top of our global priorities. Other countries should follow Mexico’s example for the phaseout. If you claim to care about the present and future generations, there is no sane reason to be in opposition."
The joint letter and petition to USTR and USDA urged that the agencies should respect Mexico’s sovereignty and refrain from interfering with its right to enact its own protective policies. The U.S. groups and individuals echoed concerns from agricultural and civil society organizations in Mexico:
"We reject the pressure from corporations such as Bayer-Monsanto — and their CropLife trade association — which are working in both the United States and Mexico to undermine the presidential decree that phases out the use of glyphosate and transgenic corn," declared Fernando Bejarano, director of Pesticide Action Network in Mexico (RAPAM).
Bejarano went on to explain, “We are part of the No Maize No Country Campaign, a broad coalition of peasant organizations, non-profit NGOs, academics and consumers, which support the presidential decree and fight for food sovereignty with the agroecological transformation of agricultural systems that guarantee the right to produce and consume healthy, nutritious food, free of pesticides and transgenics.”
UCTPTN 04.30.2021
Posted by UCTP TAINO NEWS at 4:37 PM