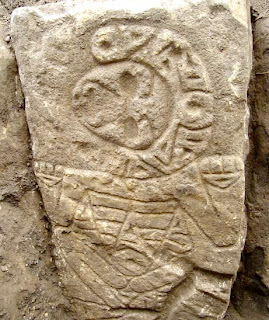 Bodies, structures, and rock art thought to belong to an indigenous pre-Columbian culture have been unearthed at an ancient settlement in Puerto Rico, officials recently announced.

Archaeologists say the complex—which dates from A.D. 600 to 1500—could be the most significant of its kind in the Caribbean.

"The site seems to show two occupations: a pre-Taino and a Taino settlement."

The Taino are thought to be a subgroup of the Arawak Indians who migrated to the Caribbean from Mexico or South America hundreds of years ago, experts say.

They were among the first tribes to encounter Europeans.

The ancient Taino settlement was discovered in southern Puerto Rico.

Archaeologists have known since 1985 that the area contained indigenous artifacts.

But the scope of the site became clear only recently, as the U.S. Army Corps of Engineers began construction on a new dam meant to protect the region from flooding.

Rivera-Ruiz said the plaza appears to be a batey, a rectangular area around which the Taino built their settlements.

The plaza, which contains stones etched with ancient petroglyphs, might have been a court used for ceremonial rituals or ball games.

"If this information is confirmed, this would be the largest known indigenous batey in the Caribbean," Rivera-Ruiz said.

Roberto Mucaro Borrero, a representative of the United Confederation of Taino People, agreed.

The site "could be the largest ancient Taino cultural area found not only in Puerto Rico but throughout the Caribbean," Borrero said.

And petroglyphs of a masculine figure with frog legs could prove especially important in understanding the culture's roots, he added.

"They could reveal evidence of direct links between the Taino and the Mayan peoples," he said, although other experts strongly refute that the two cultures are related.

Confusion and criticisms are already swirling amidst excitement over the findings.

Initial reports about bodies found in several graves at the site suggest that the people were buried in unique positions.

The bodies were "buried facedown with the legs bent at the knees—a style never seen before in the region," the Associated Press reported.

But Miguel Rodriguez, a member of the Puerto Rican government's archaeological council, said the burial positioning isn't unheard of in the area.

Kit Wesler, a Taino expert at Murray State University in Kentucky, also said that the "facedown position is unusual but probably not unprecedented."

Rivera-Ruiz of the state preservation office stressed that any claims about the uniqueness of the burial arrangements must await a full excavation and studies of any funerary objects.

Meanwhile, the U.S.-based New South Associates—a private archaeology company contracted by the Corps of Engineers to salvage the site—is at the center of controversy over their excavation methods.

According to AP, the company had initially been using a bulldozer that caused damage to centuries-old bones.

Members of the Taino who visited the dig on Saturday "witnessed damage to the site, particularly to some human remains and stones" that was apparently caused by a backhoe, Taino representative Borrero said.

Rodriguez was adamant that the company should be pulled off the project.

"This is a textbook case of what they shouldn't do," he said. "They are using mostly diggers and bulldozers and they must stop."

Rodriguez also accused the company of violating Puerto Rican law by failing to register artifacts it had taken off the island.

"They haven't told us anything about the materials, so they are not following the rules," he said.

An official from New South Associates said the Corps did not permit them to answer press inquiries.

But Rivera-Ruiz, of Puerto Rico's historic conservation office, defended the Corps and its contractor.

"The contractor was originally hired by the Corps of Engineers to conduct a salvage data recovery operation on a site that was essentially doomed," she said via email.

"Once preservation became an option, the scope and invasive nature of the project was shifted in favor of the more low-key, less intrusive hand excavation of already exposed features."

About 80 percent of the site will be left intact, Rivera-Ruiz added, allowing for the long-term preservation of most of the site.

She added that Puerto Rico's State Historic Preservation Office has overseen the company's operation, and the parties are complying with the law.

And Corps spokesperson David McCullough told National Geographic News via email that his agency stands behind New South Associates and is reworking its plans based on the new findings.

"When the Corps recognized the extreme significance of this site," he said, "we redesigned the parts of the dam project that would create the greatest adverse effect to the site."

Just wanted to share with you that I believe the burial position of the bodies found in Ponce... that practice may be Hawaiian. I am studying the similarities among the Taino people and the Hawaiian People as it relates to spirituality and I strongly believe our connection is with Hawai'i.

This is why the coqui went to the islands of the pacific. Let us keep that possibility open as we are island people.