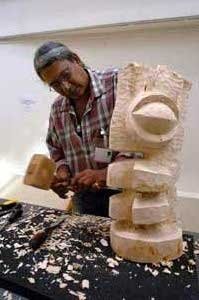 TRAVELLING home by motorbike along a dusty Guyanan road on July 10, Oswald was eager to pack his belongings for his first trip to England the following day.

He was due to showcase his skills in a four-week project, Amazon to Caribbean, at the Forest Hill museum.

But before the acclaimed artist reached his home that evening his plans came to an abrupt halt after the driver of an oncoming car shunted him off the road and into a trench.

As the driver sped off Oswald pushed his bike from on top of his body and struggled back onto the road.

His right leg was broken and two fingers on his right hand were almost severed.

The father-of-two said: "I remember seeing the car coming towards me and thinking no, no, no, before I went off the road.

"My crash helmet was like a crushed eggshell and I was covered in mud."

He was taken to hospital where doctors stitched his fingers and put a cast on his leg.

The 52-year-old continued: "I just thought what will be will be.

"I have always believed things happen for a reason and thought this would be one of those times."

The reason became clear to Oswald on August 6, when his 92-year-old mother, Olive, died suddenly.

He said: "The last time I saw her I was in my cast and she started to cry. She said she was worried about me.

"She died shortly afterwards and I felt in dying she'd given me a chance to live and survive.
"If it had not been for my accident I would not have seen her before she died."

Re-booking his flights Oswald would now arrive in London on September 14, but a final obstacle needed to be removed before he could leave.

He added: "I had an appointment with the doctor to remove my cast but when I turned up there had been a mistake, so I went home and cut it off myself with a knife and a saw." Now two weeks into his project Oswald, from a small village of 1,500, is pleased to finally be sharing his work with visitors to his exhibition.

He began carving in the 1960s and has displayed his work at 10 solo exhibitions.

Oswald says his art is more than a job - it is a way of life.

His wooden sculptures, which can take between one day and four months to complete, are all based on rituals, spirits and animals held sacred by his culture.

Oswald said: "Some are based on stories my mother told me when I was younger. They were about animals, humming birds or fish and some related to the sun and rain gods which mark events in our lives."

He added: "I'm glad I made it here eventually and am able to share my culture with the world."
Visitors to the museum, in London Road, can see Oswald carving his works between 10.30am and 5pm, Wednesday to Sunday, until October 8.