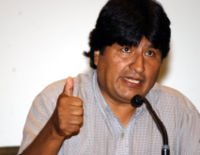 Thousands of Bolivians gathered
to celebrate the day when power
was restored to Indians, and
President Evo Morales quelled rumors of a coup.

LA PAZ, Bolivia - About 15,000 people packed a plaza Thursday in La Paz as President Evo Morales hosted a rally to mark the anniversary of Christopher Columbus' arrival in the Americas in 1492 and celebrated the return of Bolivia's Indian majority to power more than five centuries later.

Morales, who was elected last December as the country's first Indian president, spoke on Columbus Day -- commemorated as Día de la Raza, or Indigenous Peoples Day, in much of Latin America. The crowd also came to support his populist government amid vague rumors this week of a coup.''

My friends, surely 514 years ago the Western invaders thought to finish us off, sought to exterminate the indigenous people,'' Morales said. ``We have not only defended ourselves, we have not only resisted . . . here in Bolivia, we have begun to liberate ourselves.''

Morales appeared with his customary wreath of coca leaves around his neck and confetti in his hair, speaking through clouds of incense. Many admirers waved the rainbow-checkerboard flag known as the Wiphala, a Bolivian symbol of Indian pride.

Morales also told the crowd that rumors of a coup against his government had been circulated by the conservative opposition to ''frighten and intimidate'' his government and its allies.''

They wanted to defeat us psychologically, but this gathering today demonstrates the unity of our people,'' he said.Earlier in the week, Heinz Dieterich, a Mexican university professor and sometime advisor to Venezuelan President Hugo Chávez, suggested in an article published in the opposition paper El Mundo that a coup against Morales was in the works.

Chávez on Thursday reiterated his own suspicions of an effort to depose his ally Morales, and said U.S. President George W. Bush would be to blame if there were a coup in Bolivia.''

If something were to happen to brother President Evo Morales, the president of the United States would be responsible, '' Chávez said while attending a celebration of his own country's indigenous heritage.

U.S. officials deny plotting against either Chávez or Morales, who are united by their leftist policies and have close ties with Cuba. Morales also said Thursday that ''nobody is going to stop'' sweeping reforms such as the nationalization of Bolivia's oil and gas reserves and the drafting of a new constitution for the country -- both longtime goals demanded by Bolivian Indian groups.