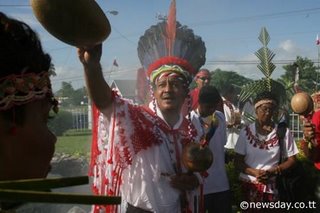 PRESIDENT of the Carib Community in Arima, Ricardo Bharath-Hernandez, yesterday called on the Government to show more “meaningful recognition” to the indigenous people. However, MP for the area, Pennelope Beckles said Cabinet has already appointed a committee to look into the needs of the group.

Bharath-Hernandez, who was speaking at the Carib Centre on Paul Mitchell Street during a function to mark the 7th anniversary of Amerindian Heritage Day, also made an impassioned plea for state protection of sacred sites, lands for his people, and an end to the destruction of medicinal herbs and plants used in craft making, by quarrying activities in the Tamana Forest.

“The Carib community will continue to struggle for meaningful recognition. We think the time is now for government to appropriate a portion of land for the survival of this community,” he said.

The Carib president, who earlier conducted a sacred smoke ceremony at the foot of the statue of Amerindian freedom fighter Hyarima on Hollis Avenue, said the Caribs needed their own village to ensure preservation of their heritage.

“We should have the choice to live together as a community, if we want to,” he said.

“All our indigenous materials for making crafts are being lost, our wild life is being hunted, and medicinal herbs destroyed. Soon all of these things will be lost forever.”

Bharath-Hernandez added, “Our burial grounds are being destroyed and people are digging up all the artifacts and are selling them as far as New York for a few dollars. We have no laws to protect these sites.”

Bharath-Hernandez said the jury was still out on whether the group should demand a public holiday. He said although the group was celebrating its seventh anniversary of recognition, there were still people who did not know about the event. Bharath-Hernandez also heads the Secretariat of the Caribbean Organisation of Indigenous Peoples (COIP).

Beckles said instruments were already handed out to the Cabinet-appointed committee “to liaise with the Carib community to find out what their needs are and to make recommendations to the Cabinet.” She said she was sure that some of the requests made by the group will be “realised”, adding that Government has already begun to structure the quarrying industry.

Monsignor Christian Perreira, parish priest of the Santa Rosa Church, admitted that there was much more “healing” to take place between the First Peoples and the Church.

“This relationship still has to be fleshed out,” he said. “The apology and intention are there, the atonement is there and while in very many ways the First Peoples have accepted that atonement, there is still the healing to come.”

Fr. Perreira added that the country’s oldest feast, The Feast of Santa Rosa, which is shared by the Church and the Carib community, has sought to bridge the divide for the past 220 years.