UCTP Taino News – Following adoption of the Declaration on the Rights of Indigenous Peoples by the newly established United Nations Human Rights Council, a handful of Nations continue to attempt to stand in the way of the document’s final ratification by the 192-member General Assembly.

During this month’s meetings of the General Assembly’s Third Committee a scathing statement against the Declaration was presented by the government of New Zealand in a joint intervention with the United States of America and Australia.

The statement has been described as a desperate attempt at “fear-mongering” by some indigenous leaders attending the current session of the General Assembly.

Despite the remarks presented by New Zealand, Indigenous Peoples around the world remain confident of the General Assembly’s passage of this non-legally binding human rights instrument, which was been debated in the halls of the United Nations for twenty years.

“The Declaration has unwavering support of many countries with large indigenous populations such as Mexico, Peru, Boliva, Guatemala and the Nordic countries” stated Roberto Mucaro Borrero, a representative of the United Confederation of Taino People who was at the UN lobbying various country representatives. “These governments, along with United Nations Agency representatives have been actively working toward alleviating any concerns some may have had about the text.”

“From the European Union to CARICOM, UN Member-States continue to express their support for the declaration and that is indeed very positive” added Borrero.

Enrique Berruga, Mexico’s ambassador to the U.N. agreed stating “We expect the declaration would be adopted with consensus for sure… it has been discussed long enough. It is high time for it to be adopted." 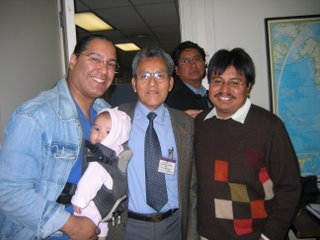