Presented by the Temple of Understanding, the award has been bestowed upon such international spiritual luminaries as His Holiness the XIVth Dalai Lama, Ravi Shankar and President Nelson Mandela.

In honor of the Temple of Understanding’s founder, the Juliet Hollister Award was created to support those secular and religious people whose life work has helped to create interfaith understanding. Along with Chief Looking Horse, two other honorees included the Venerable Dr. Yifa, a Buddhist nun from Taiwan, and Daniel Pearl the late Wall Street Journal Reporter. Daniel Pearl’s award was accepted by his father Dr. Judea Pearl.

Among those at the United Nations supporting Chief Looking Horse, Roberto Mucaro Borrero stated “The Great Sioux Nation and the sacred pipe have long been at the forefront of the international indigenous movement and in my opinion this recognition honors that sacred relationship.”

Borrero, a representative of the United Confederation of Taino People continued stating “This same week the UN is discussing the adoption of the Declaration on the Rights of Indigenous Peoples, so for me this is confirmation that these events are linked spiritually.”

While in New York, Chief Looking Horse took the opportunity to also meet with local indigenous community representatives at the American Indian Community House and the Shinnecock Nation on Long Island to share the wisdom of the White Buffalo Calf Prophecy.

Chief Looking Horse recently shared a part of this prophecy in a well-publicized address stating “Each of us is put here in this time and this place to personally decide the future of humankind… Understand both the blessing and the burden of that. You yourself are desperately needed to save the soul of this World. Did you think you were put here for something less?" 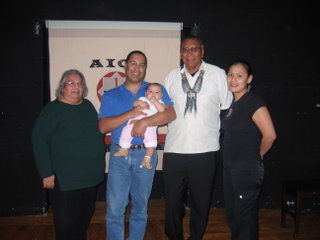 http://www.templeofunderstanding.org/
Posted by UCTP TAINO NEWS at 12:04 AM