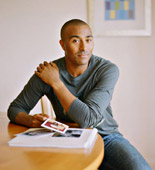 The athlete who recently turned TV sports commentator and television presenter predominantly for the BBC took part in an episode of the TV genealogy series “Who Do You Think You Are?” in September.

The program aired in the UK and in the genetic tests that are the focus of the show, Jackson genetic tests showed his ancestry to be 55% African, 7% Native American, and 38% European.

Jackson’s seven per cent Native American DNA showed that he is descended from the Tainos, the original indigenous inhabitants of Jamaica, who later mixed with escaped slaves and formed their own Maroon communities. The Maroons also fought against slavery and for Jamaican independence in the 17th century.

Cynthia Rosers, a genealogist at the Jamaican register general’s department, said: “Colin Jackson, is very light skinned. In Jamaica we would call him brown, but in American they would call him ‘redbone’.”

"The fieriness that the maroons had, first with their fight with the Spanish and then the English, I think I've got that in me now” said Jackson.

“When I lined up on many occasions to compete for Great Britain, it took a lot of heart and soul to get out there and to really be at war with my competitors... I feel really proud that I'm still linked genetically to the first settlers of Jamaica."
UCTPTN 10.13.2006
Posted by UCTP TAINO NEWS at 2:28 PM