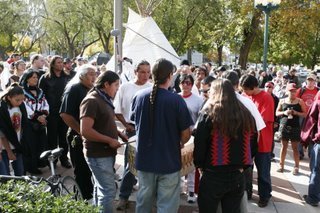 Denver, Colorado (UCTP Taino News) – Hundreds of participants from throughout the country took part in the annual of Denver’s Columbus Day Parade on Monday, October 9, 2006.

The protest was organized by the Transform Columbus Day Alliance, which has been protesting the Columbus Day Parade in Denver since 1989. According to the Alliance's website, "The celebration of Columbus is the veneration of colonialism, conquest, and genocide. As people of conscience, we must move our society closer to the democratic values of equality for all, through historical accuracy, justice in the judicial and political processes of the country, and respect for diverse peoples and cultures."

On the night of October 6th, a Four Directions March brought together people of all Nations who wound through downtown Denver, singing traditional tribal songs, and displaying various banners and signs. The march actually converged from the four directions at the protest camp at Veteran's Park in front of the state's capitol building.

Representatives from the American Indian Movement of Colorado offered prayers and local tribes expressed their concerns with the celebration of Columbus Day, the wars in Iraq and Afghanistan, sacred sites protection and ongoing struggles for Indigenous People's rights.

Glen Spagnuolo, a member of the group Progressive Italians to Transform the Columbus Holiday, urged peaceful action against the parade and called for national support to halt the 100th year of the Columbus Day celebration scheduled for 2007.

The beginning of this years parade only fueled more tensions as the Sons of Italy's Columbus Day Parade began with the mounted Calvary from Fort Carson's 3rd Armored Cavalry Regiment. The 3rd Colorado Calvary is infamous for its role in the 1864 "Sand Creek Massacre" in which hundreds of Cheyenne and Arapaho including women and children were killed and mutilated. According to historic reports the Calvary reportedly “paraded” scalps and other body parts, including human fetuses and genitalia through the streets of Denver.

The Sons of Italy procession ended with additional messages of intolerance as several vehicles proudly displayed slogans such as, "Homosexuality is a sin that will kill" and "Stop gay marriage".

Recognizing the significance of the event, UCTP Liaison Officer Dr. Enid "Tati" Conley (Taino Arawak) noted "The Denver Columbus Day Protest is an important event because we need to be agents of change and promote the truth about our history. Columbus was not an explorer, he was a SPANISH criminal who was a pirate and slave trader. There was nothing romantic about the man - he was a theif, and a mass murder."

Conley who was invited to attend the action by the organizers continued stating "I believe in my heart that all of us must promote social justice and truth and remember that our silence becomes the ally of the racists and the colonists who still exist today." 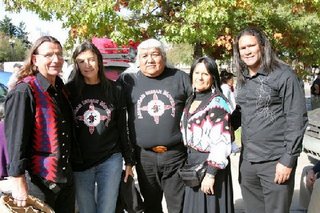