Arawak Artist In Residence At the Horniman Museum

Two years ago the Horniman's intrepid head curator, Hassan Arero went on a collecting mission to South America - to visit the rainforest tribes of Guyana who are descended from the earliest settlers of the Caribbean. Many of his purchases have ended up in the Horniman's popular exhibition Amazon to Caribbean, including work by Guyanese sculptor Oswald Hussein.

The Horniman have now invited Oswald Hussein to visit the museum, and make more of his wooden sculptures in the main hall. Surrounded by lathes and hammers, he says he is undisturbed by the rush of school parties past his bench, and can simultaneously keep a vision in his head of the natural forms which influence his work. His sculptures are abstract, but represent the whole experience of his life (recently traumatic) and a description of the surroundings of his home. Guyana is the only English-speaking country in South America.

Hussein is from the Arawak tribe and speaks Lokono - which predates the arrival of Europeans in Latin America - but he says that all children learn English at school. In the current generation there were fears that Lokono would die out, but there has been a revival in the language in recent years. As the Amazon to Caribbean exhibition records, the Arawak tribes have been threatened with extinction for some time. Once numbering in the millions, their numbers were depleted first by the Spanish invasion, and then by the Caribs. Arawaks have no tradition of war, which made them especially vulnerable.

Hussein tells us that he was prepared for London to some extent by the British Army base close to his home where he grew up - soldiers from the UK do jungle training in the area. But he was not expecting the density of buildings in London - "you can't see the horizon at all" - and he says the regulation of life by clocks also seems alien - "usually I need a watch about once a year when I go to see the doctor". He is also struck by the impersonality of London "no-one looks at you on the bus or the tube". Perhaps nothing reveals the subtle differences in culture so much as the interview process. Faced by a series of questions, he weaves seamlessly between his life and work - his hallucinations and dreams - the importance of talking to posterity through his sculptures. His great openness makes his conversation difficult to pare down into soundbites.

He tells us about Arawak beliefs about avoiding death. "You have to be a shapeshifter" he says, changing form to avoid capture by the spirits. Hussein has recently had a close escape: days before he was first expected at the Horniman in April, he was knocked off his motorbike by a hit and run driver in a remote spot. Aided by a passer by reviving him with sugar water, he was carried to hospital and eventually pulled through. Shortly afterwards his mother died; she had been an enormous influence on his work and was, he says, almost as old as Horniman Museum itself. His sculptures always begin with a slice of treetrunk, and its dimensions dictate what the sculpture can show. Some of his completed pieces have most of the wood sculpted away, leaving fine strands, others (like the one shown above) are chunky and substantial. Oswald has yet to see the Amazon to Caribbean exhibition and his own work in it - though he seems to compare himself to an anxious father outside a delivery room "You know the baby is there. You don't have to go and look yet."

You can see Oswald Hussein making wooden sculptures Wednesday - Sunday at the Horniman until October 8th. Afterwards his work will become part of the handling collection at the Horniman Museum. Visitors may also like to check out the museum's Aquarium - recently refitted to a Victorian design. It includes some scenes that closely reflect the Guyanese jungle, and give a little context to the Amazon to Caribbean exhibition, which continues until January. 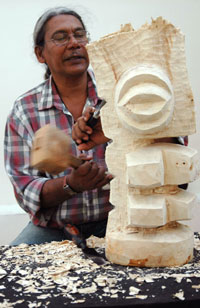 Beautiful and informative site!...I would like to learn to speak Arawak-Locono,but I need to hear it-as in a CD...are there ANY resources for this?!Wouldn't it be good for us Taino/Ciboney to learn it,as it is still in use as a complete language?Thank you,Frank -my e-mail:lovelifehues@yahoo.com