President of Bolivia Meets with Indigenous Leaders in New York 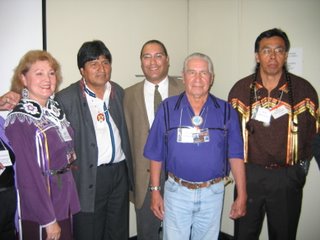 The meeting was hosted by the Secretariat of the United Nations Permanent Forum on Indigenous Issues and the American Indian Law Alliance (AILA), an Indigenous Peoples’ non-governmental organization working in New York City.

A member of the President’s delegation, Tom Kruse stated that the meeting was set up at the request of President Morales and “is meant to be a substantive exchange between Indigenous leaders from the North and the South to discuss the issues shared by Native peoples of the Western Hemisphere.”

Representatives of the Haudenosaunee, Lakota, Cree, and Taino Nations participated in the historic meeting, which was described by Kent Lebstock of AILA as “another step in the undeniable presence of Indigenous Peoples in international advocacy, especially human rights."

Substantive discussion among the participants took place and included issues such as lands, resources, the revitalization of traditional Indigenous processes in government, and conservation and environmental management. Advocacy toward the revocation of the 1493 Papal Bull and the United Nations Declaration on the Rights of the World’s Indigenous Peoples were other specific items discussed. The meeting coincided with the beginning of the General Assembly session where the issue of the Declaration is expected to be addressed.

During the meeting President Morales recounted parts of his personal and political history as well as key events that galvanized the rise of his political party to power in Bolivia. He also expressed his view that his work and that of his party are a continuation of the “500 Years of Resistance” campaign. The President stressed however, that the goal now is to move “beyond resistance to power” so that the “people” can live well.

“President Morales is an inspiration for all our Peoples, especially our youth in that he exemplifies what can be accomplished when we accept and affirm the profound teachings of our ancestors” stated Boriken Taino leader Roberto Mukaro Borrero.

Borrero continued by noting “don’t lie, don’t steal and don’t be lazy are basic laws that all Indigenous Peoples can relate to and it is a great honor to be present at time when these ancient ideals are once again being put into practice.”

President Morales considered meeting a success and felt that such meetings are his obligation as a “defender of Mother Earth.”

In a clear demonstration of his commitment President Morales not only invited the group to visit him in Bolivia but he also requested they draft comments about the Declaration, which he could consider incorporating in his speech to the UN General Assembly.
Posted by UCTP TAINO NEWS at 11:54 PM