Exotic Saona Island -The Caribbean at its best* 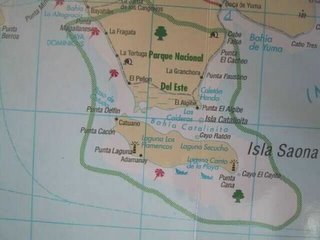 LA ROMANA.- What once was a sleepy little Dominican fishing village, is now surrounded by beach resorts fed by the shiny new La Romana airport.

Bayahibe has seen some changes in the past couple of years. The peeling, pastel-painted wooden fishing boats tied to the trunks of palm trees are now outnumbered by dozens of bright-white fiberglass boats made to carry tourists.

From the parking lot, speed boats and catamarans fill up with passengers before shuttling them to the Saona island on 45-minute crossings.

Isla Saona is 25 km long, 5 km wide, the largest of the islands adjacent to Hispaniola, it has two tiny settlements – Mano Juan and Punta Gorda – both on the coast an boasting a total population of not much more than 300.

The island’s original Taino name was Adamanay. But this was changed to Saona when the Europeans arrived in the late 15th century. Formed on a coral reef with caverns and three inland lagoons (Flamencos, Secucho and Canto de la Playa), the island – declared a Heritage of Mankind Site by UNESCO – is part of the National Park of the East and serves as a sanctuary for 112 bird species, manatees, dolphins and sea turtles.