Guyana: Rodrigues sworn in for second term as government minister... 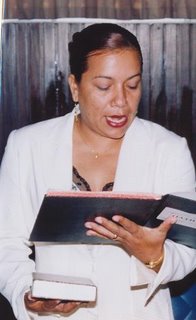 Guyana, South American (UCTP Taino News) - Carolyn Rodrigues, whom Guyana President Bharrat Jagdeo had announced would be resuming her portfolio, was sworn in for a second term as Minister of Amerindian Affairs.

With one hand on the bible, the Minister took her Oath before the President who presented her with the instruments of office.

Rodrigues was also sworn in as a member of the Cabinet during the short ceremony held at the Office of the President on Monday, September 4th 2006.