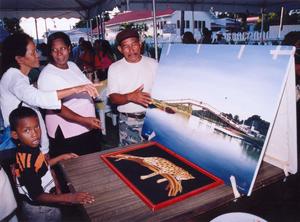 Basil Joseph explains his painting to two admiring viewers. He
was one of several persons at the launching of Amerindian
Heritage Month 2006 at the Umana Yana on Friday, where items
made by the Amerindian people were on display.

Guyana, South America - Shortly before it was announced by President Bharrat Jagdeo that Carolyn Rodrigues would remain the Minister of Amerindian Affairs, she told the huge crowd that flocked the Umana Yana on Friday for the launching of Amerindian Heritage Month 2006, that the ministry planned to have to a nationwide campaign to educate the Amerindian people about their rights.

The launch which was attended by President Jagdeo, Opposition Leader Robert Corbin, members of the diplomatic community and ministers of government, among others, has become an annual event since 1995 when a bill was passed for September to be designated Amerindian Heritage Month. This year the theme is 'Succeeding in the Quest for Progress' and the Heritage Village is Annai in Region 9.

The gathering, which was significantly smaller than the one last year, was entertained with a number of Amerindian songs rendered by the hinterland students.

The first verse of the National Anthem was sung in a native Amerindian language.

Dr Desrey Fox, the curator of the Walter Roth Museum, plans to translate the entire National Anthem and the Pledge into all nine Amerindian languages.

Rodrigues in her address said that in February this year the Amerindian Act had been passed in Parliament and signed by the president in March, and that communities had already started implementing its provisions.

The minister gave the assurance that her ministry would have land issues affecting Amerindians sorted out as soon as possible: "Some Amerindian communities have already received titles to their lands. Over 13% or 11,205 square miles is the amount of land owned by the Amerindians - more than double [that] in years gone by."

Highlighting some of accomplishments of the Ministry of Amerindian Affairs, Rodrigues said that the Suddie hostel in Region 2 had been completed about four months ago to cater for those persons accompanying the injured from the interior. She added that the hostels at Port Kaituma and Moruca should be completed later this month.

Rodrigues informed the gathering that Sheleza Reid, a hinterland student had placed third at the recently concluded CSEC examinations. She had gained ten grade ones and one grade two, and was a product of the Anna Regina Secon-dary School.

In terms of further improving education, she stated that the St Cuthbert's school would be completed later this year. According to Rodrigues, improving communities was a necessity, and that was why the ministry continued to provide radio sets and outboard engines. Some communities, she continued, such as Santa Rosa and Annai had also benefited from the installation of telephones by GT&T.

Meanwhile the president in his speech said that Rodrigues would continue to act as the Minister of Amerindian Affairs since he was very impressed with her work.

Highlighting some of the things that would be done for the Amerindian people in the coming years, he announced that by 2008 the ferry stelling would be upgraded.

"At present we are building a boat for Orealla and the Demerara River so that people can get transportation facilities..."

The head of state added that efforts would be made to give Amerindian children the same educational opportunities as the rest of the country enjoyed.

In closing he said, "I hope that Guyana can take the lesson of their Amerindian brothers and sisters - that is to work together".

Following the launching people congregated outside the Umana Yana to view or buy the craft, paintings, sculpture, jewellery and food which were on display.

Among the activities scheduled for the rest of the month are an exhibition and sale of arts and craft and Amerindian dishes from September 1-6 at the Umana Yana; Heritage Day Celebrations at Annai on the 10th, a fund-raising dinner on the 22nd at the Guyana Pegasus and a Cultural Extravaganza on the 30th at the National Cultural Centre to close off activities.