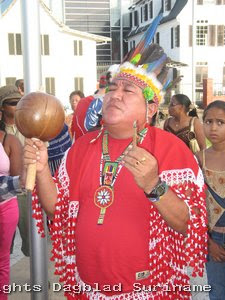 , (UCTP Taíno News) - The Organization of Indigenous People in Suriname (OIS) will commemorate and celebrate “National Indigenous Day” on .

This commemoration in is organized in cooperation with local authorities, the Indigenous communities of Grankreek, and Maho and the OIS.

Leon Wijngaarde, the President of the OIS states “The activities will take place at monuments square in , district of Saramacca and will culminate in unveiling of a new there, by Indigenous artist Leo Toenaé.”

The day will also include the performances of several Cultural Groups, a crafts-fair and family activities.

UCTP Taíno News Editor's Note: is home to several Indigenous and Maroon Nations. Among them are the Arawak and Carib Nations both of whom are part of the ancestral and cultural heritage of the Taíno Peoples of the .