An Elder Passes into Coaibei... 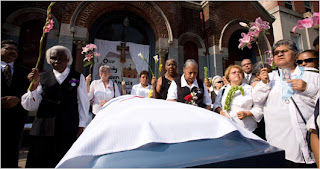 Carmen was a tireless warrior who raised countless East Harlem youngsters during the turmultious "60's, 70's, 80's, 90's and 2000's. Her last wish was to proudly attend her granddaughters Quincenera celebration which occurred on Saturday. It was a wonderful party attended by her entire family which spanned 4 living generations who immigrated to NYC from Mayaguez, Puerto Rico. "Our people are beautiful" she always commented and she had alot of love for everyone she was in contact with. Her passing was is a heartbreak to the entire Latino community of New York City.
Photo above: Friends and family of Carmen Gonzalez with her coffin outside Our Lady Queen of Angels, a church in East Harlem that closed earlier this year. (Photo: Ozier Muhammad/The New York Times)
Posted by UCTP TAINO NEWS at 3:53 PM