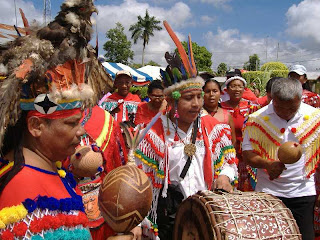 PARAMARIBO, Suriname: For the first time in its history Suriname last week observed International Day for the Indigenous Peoples as a national holiday. Nationwide festivities and cultural activities were held by Amerindian organisations in Suriname, while indigenous peoples worldwide held ceremonies in recognition of their rights.

At the main event in the Palmentuin (Palms Garden) in Paramaribo, President Ronald Venetiaan argued that the proclamation of August 9 as a national holiday is a recognition of the position of the indigenous groups. Representatives of the Amerindians, Suriname's original inhabitants, for years pressed for a national holiday recognising their historical rights and position in the country.

In his statement, President Venetiaan called for unity between the indigenous groups and the government to tackle problems and issues these tribal folks have to deal with.

"Let's put our hands together," said the Head of State, adding that disunion would lead nowhere.

Amerindians in Suriname are the least developed group in Suriname, since most of their communities and villages are located in the remote areas of the country. Most of the villages lack basic facilities and government services such as schools and medical clinics, electricity and running water, while the cost of transportation to the capital is very high.

Nardo Aloema, chairman of the Organisation of Indigenous Peoples in Suriname (OIS) called for recognition of the rights of these groups. Currently indigenous tribes are fighting for ownership of land rights in Suriname, while they also want to see more development in their communities, since most forestry and mining activities are taking place in their traditional habitat.

"We have covered a lot of ground, but there is still more work to be done. This national holiday is not the beginning or the end, but just a milestone and a very important success," said Aloema.

The International Day for the Indigenous Peoples has served to raise awareness on how indigenous peoples worldwide suffer marginalisation, exploitation, expulsion from their land and destruction of their culture, identities and habitats.

Every year a growing number of indigenous communities are resisting and speaking up for their own rights.
Story Source: Caribbean Net News