Say NO to Columbus Day! 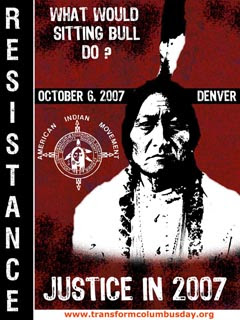 Before Columbus sailed the Atlantic, he was a slave trader for the Portuguese, transporting West African people to Portugal to be sold as slaves. The Columbus legacy is steeped in blood, violence, and death. Why Transform Columbus Day?
The Transform Columbus Day Alliance actively rejects the celebration of Christopher Columbus and his legacy of domination, oppression, and colonialism. We also reject historical misconceptions regarding Columbus and his "discovery" of the Americas. By saying NO to Columbus and his day we are saying YES to a new future of mutual respect, collaboration, and equality, a future that respects:
=the rights of indigenous peoples

The United Confederation of Taino People is a member of the Transform Columbus Day Alliance
Posted by UCTP TAINO NEWS at 2:23 PM

I am with you, kudos from puerto rico.