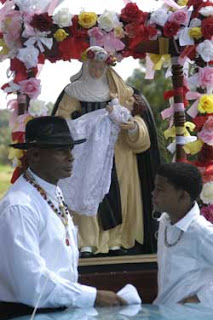 Trinidad & Tobago (UCTP Taino News) - Amerindian Heritage Day will be celebrated in Trinidad & Tobago on October 14, 2007. The Santa Rosa Carib Community of Arima will be hosting a series of events that will take place from October 14 - 19 to commemorate this annual observance recognizing Trinidad's indigenous cultural heritage. Daily educational radio spots are scheduled to be presented focusing on Arima's Indigenous community, traditional foods and medicines, history, customs, arts as well as other related topics. Lectures, cultural events, and a meeting of the Caribbean Organization of Indigenous Peoples are also set during this time with delegates arriving from throughout the Caribbean including Taino representatives of the Consejo General de Tainos Borincanos (Puerto Rico) and the United Confederation of Taino People.

Photo: Members of the Santa Rosa Carib Community during the feast of Santa Rosa in Trinidad. From Catholic News
Posted by UCTP TAINO NEWS at 12:16 PM