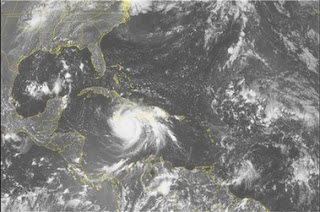 This NOAA satellite image taken Sunday, Aug. 19, 2007 at 1:45 PM EDT shows a dangerous category 4 hurricane, Hurricane Dean, bearing down on Jamaica with winds of 145 mph. This storm is on track to make either a direct hit on the island's southern shore or a very near pass later on today. (AP PHOTO/WEATHER UNDERGROUND)

KINGSTON, Jamaica (AP) - Hurricane Dean pummeled Jamaica with gusting winds and torrential rains Sunday after the prime minister made a last-minute plea for residents to abandon their homes and head for shelter. Many residents ignored the call, however, while tourists holed up in resorts with hurricane-proof walls.

The storm, which had already killed eight people on its destructive march across the Caribbean, triggered evacuation calls from the Cayman Islands to Texas, and forced the Space Shuttle to cut short its mission. Cruise ships changed course to avoid Dean, but some tourists in could not get away before the island closed its airports late Saturday.

Read the full story at: