Batu: The ancient game lives on 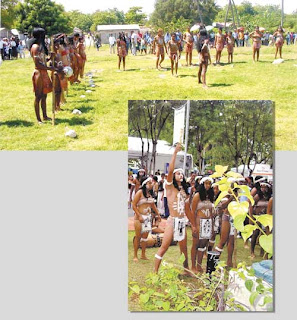 Imagine traveling back in time, 500 years to be exact, to the islands of the Caribbean. There you find beautiful sandy beaches with turquoise waters, palm trees, warm weather, soft winds and green mountainous landscapes.

In the distance, you hear the sounds of drums and maracas. You follow the pulsating music and reach the outskirts of a village. The people you meet are moving about excitedly in preparation for a ball game they call batu.

The game is played in a rectangular playing field called a batey. The batey is surrounded by huge stone slabs with carvings that bear a semblance to those found in other regions of the Americas, yet these are distinctly unique to the Caribbean. Two teams of players enter the batey. The teams have come together from different communities - perhaps to cement their political or social bonds, or just simply for the love of the game.

In any event, these games are central in the Taino social structure. The villagers begin praying and chanting to Koromo, Achinao, Rakuno and Sobaoko, the four directions. The rules of the game have long been established, but the players are reminded once again that one cannot touch the ball with their hands or feet. Only hips, elbows, shoulders and head are allowed. A heavy rubber ball is tossed in the center ... and the game begins.

After contact with the Spaniards in 1492, the Taino Indians of the Caribbean were enslaved and prohibited from continuing this ancient tradition. Just as our North American cousins who were forced into boarding schools, our people were forced into missions by the Catholic priests. Our Native customs and traditions were subsequently denied to us. Hence, our ancestors were unable to continue playing.

How and why we competed was gradually forgotten. Only in historical records do we find descriptions of how this Native sport was played. Today, archaeologists are continually finding remnants of these playing fields.

Huge bateys have been found in Kiskeya (Dominican Republic), Haiti and a few of the lesser Antilles. But the island of Boriken (Puerto Rico) has yielded the highest number of bateys found to date. It is quite possible that the most important tournaments were held on this island.

In addition to playing fields, stone collars carved with motifs of religious significance have also been excavated. Batu and ulama (ball game played by the Mexica Indians of Mexico) and other similar games were played throughout Mesoamerica before the arrival of the Europeans.

One would assume that these Native games were lost forever, but like a phoenix rising from the ashes, the descendants of the first people to meet Columbus are reviving the game. In fact this revival has been going for quite sometime.

The southwest region of the island of Kiskeya bears a striking resemblance to the southwest United States. The area is mostly arid desert with a great deal of the flora consisting of cayuco and guazabara, both cacti. Many people of Taino descent live in this area.

In 1969, Aristides Estrada Torres, Danilo Perez, brothers; Ica and Rhadames Perez, and others formed a cultural group called Grupo Marcos. The group was concerned that our Taino cultural heritage was being neglected not just by academics, but by our own people as well. This group dedicated itself to the rescue of all aspects of Taino cultural continuities and the revival of others. In time, its main focus became the resurrection of the batu game.

At first, the players would simply form a circle in the town square when they played. Playing mainly for fun, they started attracting huge crowds of tourists who visit the region each year. Soon, other people from the region wanted to join and play as well. As the numbers grew, so did the skill level. According to Rannel Baez, the main purpose of the game is to keep the ball suspended in the air. Every player must hit the ball to the opposing team. If a player fails to hit the ball or keep it in the air, he is automatically eliminated. Women play as well, sometimes challenging the men, but they are allowed to use sticks. Needless to say, the women always win. Spectators can bet on the game. The betting is called chuke'-chuke'.

In time, the individual groups evolved into leagues. Within each league are approximately four teams that play against each other. Each team has up to 40 members. As of this writing, the various leagues have not yet played against each other; however, they do collaborate as the game continues to grow in popularity. With each success, a greater ambitious endeavor began to materialize: playing the game at a national level and in schools throughout the country.

Like any other sport, strength and physical endurance must be maintained. The groups now have physical trainers. Roberto Brito, a physical education teacher who works for the regional Secretary of Education, trains the Batey Athene group and has been especially active in the revival efforts in Azua. Other Batey Athene trainers include Luis Pujols, Luis Vargas, Bayardo Ortiz and Hector Ortiz. Salvador Ubaez trains the members of Batey Azua, and Starling Diaz and Baez train the members of Batey Cubatay. Members hope to one day play in Mexico, where the game of ulama has been revived as well.

Batey Athene has traveled to the United States and Puerto Rico to play. Batey Athene has played with Taino players in Puerto Rico who are reviving the game as well. In fact, throughout the entire Caribbean region, a substantial Taino revitalization movement is spreading like wildfire. ''We will no longer tolerate the popular viewpoint of our ancestors' supposed extinction and the demise of our culture,'' said Baez of Batey Cubatey. Whether in isolated Native communities in Cuba or on the streets of San Juan or New York City, the descendants of the Classic Taino are making a stand.

Brito said, ''Our main goal is to rescue and spread the truth about our origins and our autonomous culture in the hope that our younger generations will learn through our Native sport that our ancestors were a great people. That we carry strong cultural elements passed down to us from the time of our ancestors - and no matter how hard certain people tried to erase this magnificent past, they were unable to do so.''

A warm breeze carries the aromas of ancient traditional cuisine such as chen-chen (corn cake) and casabe (yuca bread). There are women selling mabi and cacheo (traditional Native beverages). The sounds of wooden drums and maracas pulsate through the air.

Two teams of young men have made their way into the circle. A man enters and prays to the four directions. The rules of the game are established. A rubber ball is tossed in the air and the game begins. This scene is taking place in the here and now, not in the distant past. The batu game has been revived, hopefully never to disappear again.

Photos courtesy Rannel Baez -- The ball game called batu is central in the Taino social structure. The game is played in a rectangular playing field called a batey. The players cannot touch the ball with their hands or feet. Only hips, elbows, shoulders and head are allowed. (Bottom) The villagers pray and chant to Koromo, Achinao, Rakuno and Sobaoko, the four directions, before beginning the game of batu.
Story Source: Indian Country Today
===============================