Sacred reclamation and Grand-Clean-up of Jacanas in Puerto Rico 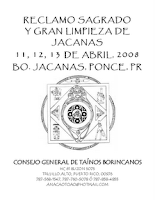 UCTP Taíno News - The Consejo General de Tainos Borincanos in collaboration with other organizations and agencies has organized a clean-up of the sacred site of Jacanas in Ponce, Puerto Rico from April 11th through the 13th. The council invites the general public as well as other indigenous peoples to join with them in this noble effort for conservation and in memory of the ancestors. The effort is part of a larger effort to save ancient indigenous sacred sites in Puerto Rico. Camping will be available as well as an orientation of the spiritual, environmental, and cultural importance of the area on April 13th. For further information on the event, contact Elba Anaca Lugo at 787-568-1547 or 787-760-5078, or Grandmother Shashira at 787-858-4855.
UCTPTN 04.01.2008
Posted by UCTP TAINO NEWS at 10:30 PM

We are farmers who live in Grenada and are very interested in the people who were here before us. There are some axe heads here;

that have been found whilst turning the soiland that may be of interest to you. We would be very grateful if anyone at your site could enlighten us about them.
We enjoy visiting your excellent web site.