United Nations (UCTP Taino News) – In his opening address to the United Nations Permanent Forum on Indigenous Issues Secretary-General Ban Ki-Moon stated that this year’s session takes place during a “historic crossroads”. Mr. Ban said that with last year’s adoption of the Declaration on the Rights of Indigenous Peoples the two-week Forum takes on a “new role”.
The Declaration outlines the rights of the world’s estimated 370 million indigenous people and outlaws discrimina 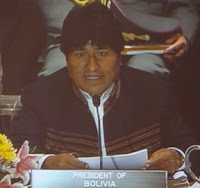 tion against them. It sets out rights to culture, identity, language, employment, health, education and other issues.

The Forum’s opening session included a precedent-setting presentation by Bolivian President Evo Morales Ayma, the first indigenous leader of his country. President Morales called on the world body to recognize indigenous cultures and needs, an appeal that he had made on several occasions in the past two years, using his high profile as head of state. The Bolivian President also told the gathering to be wary of transnational corporations and industrialists, denouncing such companies as "exploiters" of his country's natural resources.

Climate change is one of the special themes of this year’s session of the Forum. This is a critical issue for Indigenous Peoples around the world as they are among the first to face the direct consequences of climate change, due to their dependence upon, and close relationship, with the environment and its resources. An important issue to Caribbean Indigenous Peoples, Kalinago Chief Charles Williams of Waitikubuli (Dominica) noted that “Climate Change is a reality.” 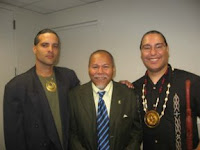 The IPCGC also addressed agenda items on Human Rights and Indigenous languages. In its collective statement on languages the Caucus addressed the need for the full and effective participation of Caribbean Indigenous Peoples in regional follow-up initiatives.

The IPCGC’s intervention on Human Rights was presented by the Consejo General de Tainos Borincanos. The statement focused on the current situation of Sacred Sites such as Jacanas in Ponce, Puerto Rico as well as the lack of recognition of the rights of Taino People on the island.

Over 2500 participants - including senior UN officials and representatives of States, civil society and academia – are registered for the Forum, which ends on May 2, 2008.
UCTP Photo (1): President Evo Morales Ayma of Bolivia