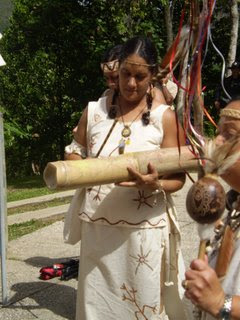 UCTP Taino News – The Otomi Nation of Mexico has issued a call to “Indigenous First Nations, Peoples, Communities and Organizations of the World and all Humankind” in an effort to fulfill a prophecy that speaks of healing Mother Earth. Entitled the “Grand Ceremony of the 8,000 Sacred Drums”, Otomi spiritual leaders and allies will conduct a ceremony on March 21st 2008 at the Otomi Ceremonial center at 12noon, (local time) in the Temoaya, State of México.

In collaboration with the International Indigenous University, the Otomi have called for solidarity for this ceremony on previous occasions and this year, they have renewed their efforts to “begin a a true Healing of Mother Earth, of All the Species and of the Human Family”. The Otomi feel that the state of the Earth today represents a “total imbalance” and that there is a need to “re-unify” and “re-discover” our connection to the earth and “cosmic energy”. Taino leaders in Boriken (Puerto Rico) and the Diaspora have responded officially to the Otomi Nation, and have pledged solidarity with the 8,000 Drums event on Friday, March 21st.

Council and community members of the Consejo General de Tainos Borincanos will conduct ceremony at 12noon at the Jacanas Ceremonial Grounds in Ponce, Puerto Rico. This site has been the center of controversy since last year as the U.S. Army Corps of Engineers and their contractor, New South Associates, continues to conduct work in the sacred area without consultation with the local indigenous community.

“The U.S. Army Corps of Engineers and New South Associates have removed sacred artifacts from our island with no accountability” stated Elba Anaka Lugo of the Consejo. “These entities, supported by the government, continue to ignore the calls for dialogue.”

In solidarity with the Otomi as well as the event in Jacanas, council and community members of the Caney Quinto Mundo will also gather at 12noon on their 400 acre land base located in the island’s central mountain region in Orocovis, Puerto Rico.

In New York, members of the Cacibajagua Taino Cultural Society and Iukaieke Guaynia will gather in the Bronx with the Friends of Brook Park later that evening to unify with the Otomi’s purification ceremonies also occurring on the 21st and throughout the weekend. The Bronx ceremony will be led by Kasike Roberto Mukaro Borrero and will begin at 5:30pm at Brook Park located at 141st St. and Brook Ave. Participants are urged to arrive at 4pm to assist in the preparations.

“We felt it was important to honor and unify our traditions on this special day not only with drums but through the purification ceremony known by the Otomi as Temascal and by Taino as Kansi or Guanara” shared Borrero, who is also a representative of the United Confederation of Taino People (UCTP).

Another 8,000 Drums Ceremony will be held in Massachusetts and led by Claudia Fox Tree, a local representative of the UCTP. Fox Tree will begin her gathering at 2pm to link to the ceremony in Mexico at 12noon.