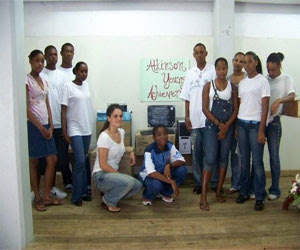 Photo: Members of the Young Achievers Group of Atkinson Community pose with their computers and accessories.


“The days when students used the library to do research and complete their assignments are virtually gone with the advent of the internet and other ICTs.”

DOMINICA - The Commonwealth Youth Programme Caribbean Centre (CYPCC) and the Youth Department of the Government of Dominica have collaborated to present computers and other Information Communication Technology (ICT) to the Young Achievers Group of Atkinson Community.

At a presentation ceremony on June 28 at the Carib Territory, CYPCC Director Mr Charles challenged the Young Achievers to look towards the development of a Youth Information Centre that would help assist artists and other skilled young people to further develop their talent.

"Computers and ICT have become a very important aspect of the development of the community. There are communities among our Commonwealth countries where ICT has made a significant difference between people living in poverty and an improved standard of living," Mr. Charles said.

"This is the first phase; set up the computers and then you can get ready for the second phase but give us a development plan towards that quest and I can assure you that we will assist in making available additional ICT equipment to establish the Youth Information Centre," he urged.

Chief Youth Development Officer at the Division of Youth, Mr. Jules Pascal noted that the days when students used the library to do research and complete their assignments are virtually gone with the advent of the internet and other ICTs.

However, a proper computer facility was lacking in the Carib Territory and especially in Atkinson, he noted.

Pascal said the Youth Division will ensure that the computers are networked and assured that the Division will also service the equipment free of cost.

Chairman of the Atkinson Village Council, Mr Kitchener Laville said he was elated that the community's youth will finally have access to the internet which will ease the difficulties encountered doing school assignments.

Laville noted that the computers will be placed at the community centre and students should be able to begin using them shortly.
Source: Commonwealth Youth Programme
Posted by UCTP TAINO NEWS at 2:29 PM