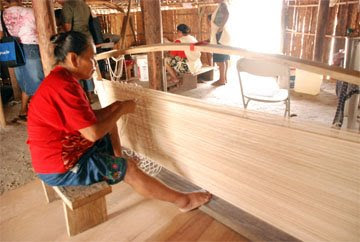 The Indigenous Art of Hammock weaving demonstrated
at CARIFESTA X in Guyana
GUYANA - A symposium on Indigenous Performance Traditions on Monday focused on the collection of Amerindian artifacts in the Austrian Museum of Ethnology which houses some 350 artifacts from Guyana. Most of these artifacts were collected from the Makushi and Wapishiana regions early in the 19th century by Austrian zoologist Johann Natterer. The symposium was held at the Guyana International Conference Centre, Liliendaal as part of a symposia panel for Carifesta X, the Government Information Agency (GINA) reported.

Minister within the Ministry of Education Dr. Desrey Fox opened the session and panelists Claudia Augustat, Head of the South American Collection, Museum of Ethnology in Vienna, Austria and Henk Tjon, Theatre and Artistic Director with the Surinamese Delegation to Guyana made presentations.

According to GINA, Minister Fox stated that indigenous performance tradition is probably the most misunderstood since it is not what people are accustomed to as it focuses on birds and animals with specific characteristics which the Amerindians find impressive.

This, she said, impacts on the very lives of Amerindians and helps them to survive in very harsh environments.

“We are in a country with a diversity of cultures and I don’t think we are able to utilize each other’s resources,” Minister Fox is quoted as saying. She noted also that this will “lead to understanding each other and to have a sense of deep identity which we are still grappling with.”

Meanwhile, Augusta said that according to records in the archives of the Austrian Museum, Natterer made his journey in 1831 by travelling up the Rio Branco River to the Brazilian border, then on the Takutu, Ireng and Pirara Rivers before reaching British Guiana.

These include objects made from feathers, beads, seeds and animal teeth, GINA added.
Source: Stabroek News
Posted by UCTP TAINO NEWS at 7:04 PM