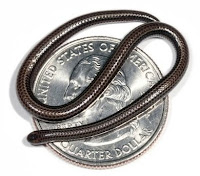 S. Blair Hedges, an evolutionary biologist at Penn State University whose research teams also have discovered the world's tiniest lizard in the Dominican Republic and the smallest frog in Cuba, said the snake was found slithering beneath a rock near a patch of Barbadian forest.

Hedges said the tiny-title-holding snake, which is so diminutive it can curl up on a U.S. quarter, is the smallest of the roughly 3,100 known snake species. It will be introduced to the scientific world in the journal "Zootaxa" on Monday.

The Barbadian snake apparently eats termites and insect larvae, but nothing is yet known of its ecology and behavior. Genetic tests identified the snake as a new species, according to Hedges. It is not venomous.

Zoologist Roy McDiarmid, curator of amphibians and reptiles at the Smithsonian's National Museum of Natural History in Washington, said he has seen a specimen of the diminutive creature. He saw no reason to argue with the assertion that it is the world's smallest snake.

McDiarmid said the Barbados creature is a type of thread snake, also called worm snake, which are mostly found in the tropics. "We really know very little about these things," he said in a Sunday telephone interview from his Virginia home.

Finding the globe's tiniest snake demonstrates the remarkable diversity of the ecologically delicate Caribbean. It also illustrates a fundamental ecological principle: Since Darwin's days, scientists have noticed that islands often are home to both oversized and miniaturized beasts.

Hedges said the world's smallest bird species, the bee hummingbird, can be found in Cuba. The globe's second-smallest snake lives in Martinique. At the other end of the scale, one of the largest swallowtail butterflies lives in Jamaica.

Scientists say islands often host odd-sized creatures because they're usually inhabited by a less diverse set of species than continents. So island beasts and insects often grow or shrink to fill ecological roles that otherwise would be filled by entirely different species.
Posted by UCTP TAINO NEWS at 7:42 PM