ScienceDaily (Aug. 26, 2008) — For just one late-summer night each year, the shallow waters off the coast of Puerto Rico fill with the pale-pink spawn of elkhorn corals -- the tiny, round packets of the adult corals' eggs and sperm.

This year, Iliana Baums, assistant professor of biology at Penn State, is there to collect the coral spawn as part of a research and education project to grow the newborn juvenile corals for distribution to aquaria and to the wild. "It looks like it's snowing," she said, "except that the egg and sperm packets rise underwater to the surface rather than fall to the ground." 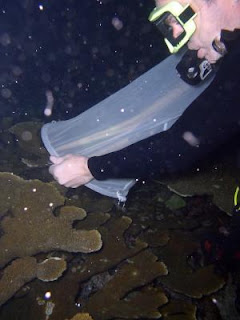 llecting the spawn is twofold: she hopes to acquire important information about how corals will respond to global warming, and she also is teaching a group of 28 aquarium professionals, as part of an international workshop, how they can participate in the protection of corals. Baums will hunt for and collect coral spawn on the nights of 21 and 22 August. For seven days thereafter, she will remain at the site, working to grow the newborn juvenile corals for distribution to aquaria and to the wild.

According to Baums, corals are extremely sensitive to changes in water temperature. "An increase in water temperature of just a couple degrees Celsius results in visible damage to adult corals and their offspring," she said. Referring to a paper published in a July 2008 issue of the journal Science in which the authors report that one-third of all reef-building corals face an elevated risk of extinction from climate change and other factors, Baums said it is imperative that scientists and marine-resource managers begin to think about how to rescue these important animals.

That's why Baums is searching for particular populations of coral that produce offspring that are better able to withstand high water temperatures. Because most coral species are triggered by moonlight to release their egg-sperm packets, Baums will begin her experiment with a nighttime trip to a designated reef off the coast of Puerto Rico. There, she will collect spawn from elkhorn corals, which are protected as a threatened species by the United States Endangered Species Act. In small rearing chambers, she will place eggs from certain populations with sperm from certain other populations.

Over the next seven days, she will raise the newly formed juvenile corals in saltwater tanks on land. She then will ship half of them to several aquaria around the world and will return the other half to the reef. "Corals are most vulnerable when they are very small, and our protected nursery will help them to get through the first critical days," said Baums.

Next, the juvenile corals in captivity will be subjected to a variety of higher-than-normal and lower-than-normal water temperatures in order to pinpoint those offspring whose parents can tolerate abnormal water conditions. Once Baums identifies these individuals, she will search their genomes for variants of genes that are responsible for resistance to abnormal water temperatures. With this knowledge, she then can develop genetic markers that will enable her to identify wild elkhorn-coral populations throughout the Caribbean that contain such gene variants.

Water from the ocean is pumped into tubs where juvenile corals will be raised for a period of seven days after scientists harvest them from the wild.

In collaboration with SECORE (SExual COral REproduction), an international organization of professional aquarists and scientists that is concerned about coral conservation, Baums will hold a workshop during the annual coral-spawning event in Puerto Rico. Through the workshop, she and other researchers will teach a group of 28 aquarium professionals from around the world how to collect coral spawn, do fertilization experiments, raise larvae, and care for larvae once they are shipped back to the participants' home institutions. The workshop, which is now in its third year, already has been given to over 60 aquarium professionals. Baums and other members of SECORE plan to continue to the workshop in future years to reach as many aquarium professionals as possible.

"Poachers often collect wild corals to satisfy the demand for aquariums, but aquarium professionals are looking for alternative, less destructive sources of these animals. SECORE's goal is to develop methods to eventually breed corals in captivity, thereby reducing some of the pressure to collect corals from the wild," she said. "We are starting by raising juveniles from wild-caught eggs and sperm, which enables us to provide aquariums with the corals they desire without damaging wild adult colonies.

In return, the aquarium operators help us to perform the experiments and give us tips on how to raise adult corals in captivity, which is something they are very good at." Baums added that the establishment of good aquarium populations is a safeguard against the extinction of elkhorn corals.

The corals that Baums ships to aquaria will undergo one of two treatments: half of them will be exposed to species of the zooxanthellae -- algae that live inside the cells of corals and provide them with necessary nutrients and energy -- that naturally occur with elkhorn corals, and half of them will be exposed to zooxanthellae from other regions of the world, where elkhorn corals are not present.

In past years, elkhorn corals in captivity readily took up foreign zooxanthellae and coped better than those that took up only native species of zooxanthellae. These observations will be tested in a controlled experiment as part of this year's workshop. While Baums said she would not release foreign strains of zooxanthellae into the wild, she does think such measures could be beneficial to corals that are maintained in aquaria.

Baums is partnering with Margaret Miller, a scientist with the National Oceanic and Atmospheric Administration (NOAA), who will do the same experiment using corals from Florida, where annual minimum water temperatures are lower. The team will compare corals in the two locations to learn if there are any differences in their abilities to withstand high and low water temperatures. A goal of the research is to find out if current temperature differences between Florida and Puerto Rico will influence the abilities of corals to tolerate future warm-water conditions associated with global warming.

This research and the workshop are funded by the NOAA and the National Science Foundation.