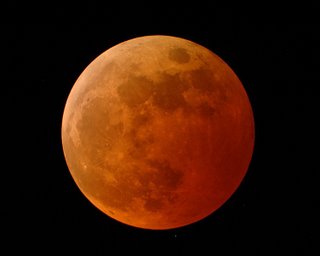 On March 3, 2007, the Moon will turn red during a total lunar eclipse visible from parts of all seven continents, including the eastern half of the United States...

In the USA, the eclipse will already be underway when the moon rises on Saturday evening. Observing tip: Find a place with a clear view of the eastern horizon and station yourself there at sunset. As the sun goes down behind you, a red moon will rise before your eyes.

Check out the RSS feed at http://science.nasa.gov/rss.xml

* On the moon, the ground turns red during a lunar eclipse. The photo above was taken by Doug Murray of Palm Beach Gardens, Florida, during the total lunar eclipse of Oct. 27, 2004.