Our first citizens: Florida's earliest residents developed their own societies to match their environments

The first people in Florida and the Treasure Coast were hunter-gatherers, existing on what they could kill or pick from trees and bushes. But their society evolved into a complex system of chiefdoms much like the European feudal system. People began to live in wooden-walled towns, engage in rudimentary agriculture, create mound complexes for political and religious purposes and trade inside and outside Florida.

The first people's ancestors had come from Asia more than 12,000 years ago, over the land bridge that is now the Aleutian Islands and across North America. The Florida and Treasure Coast those people found were much different from the ones in which we live. 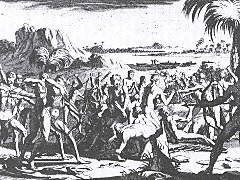 Historian Jerald T. Milanich notes in his book, "Florida's Indians from Ancient Times to the Present" that the Pleistocene or Great Ice Age was ending, and Florida was cooler and drier. It was also about twice its present size because the sea level was lower, as water was sealed up in huge glaciers. The land we now know as the Treasure Coast was 10 miles inland.

Here is a look at the tribes and their history.

The Calusa: Evolving from an earlier people, who lived on shell mounds in the swampy areas around Fort Myers, the Calusa took advantage of relatively plentiful food supplies. They built towns and large ceremonial mound complexes, some of which can be seen at Fort Center west of Lake Okeechobee. They dominated the east coast tribes.

The Tequesta: The Tequesta had much the same culture as the Calusa. There is evidence around their dwelling sites in Dade and Broward County that they engaged in trade by canoe with the Bahamas and Cuba. Their territory apparently extended into what is now Palm Beach County.

The Jeagas: The Jeagas were a more primitive tribe of hunters, fishermen and warriors, if the Quaker writer Jonathan Dickinson's description after his shipwreck among them in 1696, is correct. They inhabited the east coast from what is now mid-Palm Beach County to the Jupiter Inlet. They left an extensive collection of mounds including some for burial, but most for refuse such as shells and animal bones.

The Hobe and the Ais: The Hobe and the Ais or Ays, which may be different Spanish names for the same tribe, lived from the Jupiter Inlet north to the Cape Canaveral area. They lived on hunting and fishing. The Ays had a village on Hutchinson Island just north of the present House of Refuge plus other sites near present day Fort Pierce, Vero Beach and Sebastian. A large village once stood on the south side of what is now the St. Lucie Inlet, but erosion washed it into the sea. They built burial mounds and shell middens, one of the largest forms the base for the old Leach Mansion in Indian RiverSide Park, another supports the Jupiter Lighthouse, but the largest once stood in Sebastian. The latter was mined for shell for roads in the 1920s.

The Caribes and Taino: The Caribes and Taino were two tribes from the Caribbean Islands, who made long voyages between the islands in their long canoes. They were skillful navigators, tradesmen and warriors. They were the first of the native peoples met by Columbus in 1492. Some historians believe they settled in South Florida around the Miami River. They traded and raided along the Treasure Coast. In the late 1940s, a Caribe burial of about a dozen individuals was found on Hutchinson Island between Jensen Beach and Fort Pierce.

These people lived in a temperate climate hunting mastodons, bison and other large animals. They had no fixed dwellings. Historians be'lieve some of them came north through the Caribbean and Bahamas to settle in Florida.
8,000 B.C. to 750 B.C.

The Ice Age has ended and the glaciers are melting, causing the sea level to rise, changing Florida's environment. The discovery of an 8,000 year old cemetery at Windover Farms in Titusville in Brevard County, changed archaeologists views of the early people of our area. The burials revealed advanced skills in weaving, medical care, tool making, agriculture and social skills.

This is the period when native cultures developed. In the north, the St. Johns Culture eventually created the Timucuan and the Deptford Culture created the Apalachee. In south Florida it produced the Glad'es Culture, centered on the southwest coast among the Calusa Indians, but stretching east to include the tribes of our region. The native peoples of this period traded shells, fish bones and freshwater pearls for copper, iron ore and corn seeds from the people of the northern part of the continent.

Until the 1500s, the people of Florida had no contact with Europeans. They traveled among their tribes for purposes of trade and warfare, often venturing to sea either on purpose or by accident to make long canoe trips. Evidence, in the form of burials and trade items, of visits from people of the Caribe and Taino cultures has been found on Hutchinson Island.

But in 1513, their world changed forever when Europeans landed in Florida.
Posted by UCTP TAINO NEWS at 10:36 AM