INTERNATIONAL BATU BALL GAME TO BE HELD IN PUERTO RICO 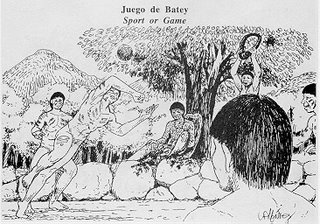 UCTP Taino News - The United Confederation of Taino People (UCTP) in collaboration with El Consejo General de Tainos Borincanos, Fundacion Luz Cosmica Taina and Caney Quinto Mundo is honored to announce the First Annual Caribbean International Batu Games in Borikén (Puerto Rico) scheduled for July 2007. Batu is an ancient Taino ceremonial ball game, which has been regaining popularity in Puerto Rico and other islands over recent years. Opposing teams use a rubber ball in ways reminiscent of volley ball but without a net or the use of their “hands.” 15th century European colonizers marveled at the agility of Taino ball players and the game’s main piece of equipment - a rubber ball. Europeans had never before seen this Taino invention.

Players participating in this historic event will be representing Kiskeya (Dominican Republic), Borikén, and other Caribbean indigenous island homelands.

The First Annual Caribbean International Batu Games 2007 seeks to return the game's focus to its original intention as a unifying ceremonial force, which will promote our culture in a meaningful and respectful way. "The United Confederation of Taino People is proud to co-sponsor this event and wishes to extend a special thanks to all of its supporters and financial contributors" stated Roberto Mucaro Borrero, UCTP President and Chairman.